The Mercedes-Benz 300SL was the first iteration of the SL-Class grand tourer convertibles and fastest production car of its day. Internally numbered W198, it was introduced in 1954 as a two-seat sports car with distinctive gull-wing doors and later offered as an open roadster.

Built by Daimler-Benz AG, the fuel-injected production model was based on the company's highly successful yet somewhat less powerful carbureted 1952 race car, the Mercedes-Benz 300SL (W194).

The idea of a toned-down W194 tailored to affluent performance enthusiasts in the booming post-war American market was suggested by Max Hoffman. As such, it was introduced at the 1954 New York Auto Show rather than the Frankfurt or Geneva shows at which other Mercedes models made their debuts. The "300" in its name referred to its three litre engine displacement, and "SL" stood for "Sport Leicht" (Sport Light).

The 300SL was best known for its distinctive gull wing doors, first-ever consumer fuel-injection, and world's fastest top speed. The gull wing version was available from March 1955 to 1957, the roadster from 1957 to 1963. It was followed in the Mercedes line by the 230SL.

The W 198 goes back to the racing sports car Mercedes-Benz W 194 , which already received the name "300 SL". He won unexpected racing successes in 1952. In the previous year, Daimler-Benz had decided to take part in races again in 1952 and to build a sports car for this purpose. In order to achieve a sufficient performance for racing, the existing engine of the coupe 300 S (M 188) had to be further developed. Furthermore, equipped with carburetors, he made 175 hp (129 kW).

In 1952, the vehicle took part in the most important races of the year, against much stronger motorized opponents. For the first time, the new SL showed speed and reliability at the Mille Miglia at the beginning of May and achieved second place in this endurance race. At the price of Bern succeeded the triple victory. The 24-hour race at Le Mans ended the racing car unexpectedly with a double victory. The winners were Hermann Lang and Fritz Riess . With an overall average of 155.575 km / h, they achieved a new record in Le Mans history. Second were Theo Helfrich and Helmut Niedermayr . A race at the Nürburgringended with a fourfold success. At the Carrera Panamericana in Mexico , the 300 SL with Karl Kling and Hans Klenk won again - despite a vulture flying through the windscreen.  Thus, Mercedes-Benz followed up on the great successes in racing before the Second World War on.

A particular vehicle in SL history was the 300 SL with the chassis number 0011/52, which was developed for the 1953 racing season. However, the car was not used because Mercedes-Benz decided to take part again in Formula One from 1954 onwards. Thus, the "planer", as the vehicle was called by the experimental engineers because of its distinctive front end, to the intermediate model to 1954 presented series sports car 300 SL (W 198 I). The single piece, since 1952 continuously in factory ownership and today in the care of Mercedes-Benz Classic, already had the engine with gasoline direct injection and 16-inch wheels. His gearbox was installed on the rear axle . The body was revised in favor of a lower air resistance. However, the arrangement of the transmission was not adopted in the series.

Mass production of the 300 SL was initially not planned. But Max Hoffman , an American importer of Mercedes-Benz vehicles, has long been wishing for a large and a small Mercedes sports car for his clientele from the Daimler-Benz board of directors. A basis for this could be the racing coupe of 1952, which had surprisingly won the Carrera Panamericana and thus was known in the US. After lengthy consideration, the decision for mass production of the 300 SL in the street version as W 198 fell. In addition, the production of a smaller roadster , the Mercedes-Benz W 121 B II (190 SL) was announced.

Not six months after the decision of the Board, the two sports cars premiered at the "International Motor Sports Show" in New York, which took place from 6 to 14 February 1954. Mercedes-Benz experienced a very positive response to the 300 SL and the 190 SL at the Motor Show. Series production began in August 1954 at the Sindelfingen plant, Compared to the US-issued 300 SL, there were small changes for the series, namely triangular windows in the doors, modified door locks, a two-spoke steering wheel instead of the three-spoke steering wheel with spring spokes, timer and some control buttons on the dashboard were repositioned. There were also levers for heating and ventilation that the exhibition model had not yet had. Shortly after the start of production or from the 51st car, the long shift lever, which meshed directly with the transmission, was replaced by a shorter one with a shift linkage. The first W 198 were first sold in Europe in 1954 and in March 1955 the first vehicle was exported to the USA. Of the 1400 Gullwing vehicles built in total, the largest part, about 1100, reached the USA. For the special needs of customers in the US (a little more comfort, larger trunk and often a convertible ) was built in 1957, the 300 SL Roadster (W 198 II). There were 1858 pieces of this model. 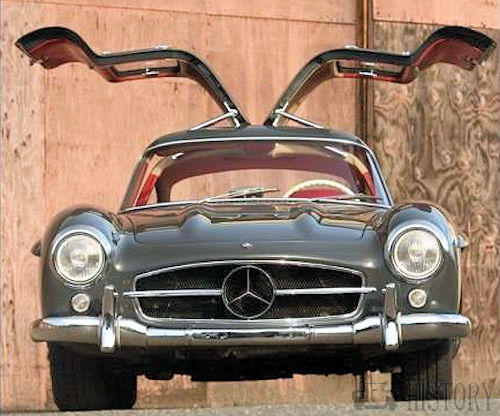 New York Mercedes distributor Max Hoffman, Daimler-Benz's official importer in the USA, suggested to Daimler-Benz AG management in Stuttgart that a street version of the 300SL would be a commercial success, especially in America.

The racing W194 300SL was built around a tubular chassis to offset its relatively underpowered carbureted engine. Designed by Daimler-Benz's chief developing engineer, Rudolf Uhlenhaut, the metal skeleton saved weight while still providing a high level of strength. Its unique architecture gave birth to the model's distinctive gull-wing doors, as part of the chassis passed through what would be the lower half of a standard door. Even with the upward opening doors, the 300SL had an unusually high sill, making entry and exit from the car's cockpit problematic. A steering wheel with a tilt-away column was added to improve driver access.

The 300SL's body was mainly steel, except for the aluminum hood, doors and trunk lid. It could also be ordered with an all-aluminum outer skin at tremendous added cost, saving 80 kg (176 lb).

More than 80% of the vehicle's total production of approximately 1400 units were sold in the US, making the Gullwing the first Mercedes-Benz which sold in considerable numbers outside its home market and confirming the validity of Hoffman's suggestion. The 300SL is credited for changing the company's image in America from a manufacturer of solid, but staid, automobiles to that of a producer of sporty cars. 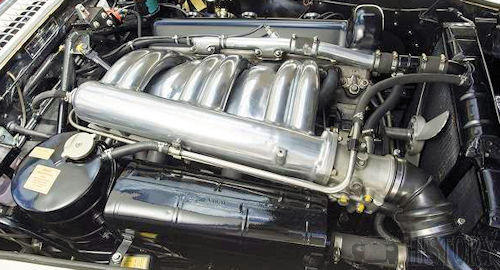 The 300SL's engine, canted at a forty-five-degree angle to the left to allow for a lower hoodline, was the same 3.0 litre straight-6 as the regular four-door 300 tourer. Fitted with a Bosch mechanical Gasoline direct injection system it had almost double the power of the original 86 kW (115 hp) carbureted version.

While not the first fuel-injected car - Mercedes engineers who had developed the principle for the DB 601 fighter aircraft engine had used fuel injection in the tiny 2-stroke Gutbrod they had designed after the War - it was the first to inject fuel directly into the cylinders. This innovation allowed a top speed of up to 260 km/h (161 mph) depending on gear ratio and drag, making the 300SL the fastest production car of its time.

The engine's maintenance requirements were high. Unlike the current electrically powered fuel injection systems, the mechanical fuel pump would continue to inject gasoline into the engine during the interval between shutting off the ignition and the engine's coming to a stop; this gasoline was of course not burned, and washed the oil from the cylinder walls and ended up diluting the engine's lubricating oil, particularly if the engine was not driven hard enough nor long enough to reach a temperature high enough to evaporate it out of the oil.

Exacerbating the problem were the large oil cooler as well as the large volume of oil (10 liters), both oriented more to racing than to street driving, which virtually guaranteed that the oil would not reach a high enough temperature. In practice, many street drivers would block off airflow through the oil cooler, and the recommended oil change interval was 1,000 miles (1,600 km). Operation of the clutch was initially very heavy, later roadsters having an improved clutch arm helper spring which reduced the pedal force. From March 1963 to the end of production, a light alloy crankcase was used on a total of 209 vehicles.

Aerodynamics played an important role in the car's speed, Mercedes-Benz engineers even placing horizontal "eyebrows" over the wheel openings to reduce drag. Unlike many cars of the 1950s, the steering was relatively precise and the four-wheel independent suspension allowed for a reasonably comfortable ride and markedly better overall handling. However, the rear swing axle, jointed only at the differential, not at the wheels themselves, could be treacherous at high speeds or on imperfect roads due to extreme changes in camber. The enormous fuel tank capacity caused a considerable difference in handling depending on the quantity of fuel on board. 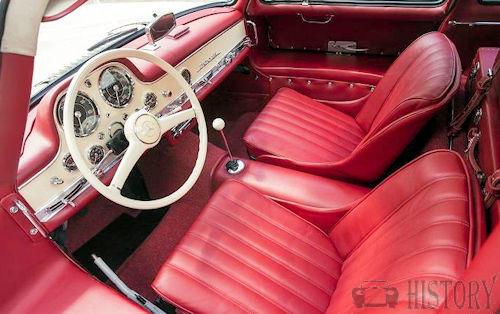 In 1952, the original 300SL (model Mercedes-Benz W194) scored overall wins at the 24 Hours of Le Mans, in Bern-Bremgarten, in the sportscar race of the Eifelrennen at the Nürburgring, and in Mexico's Carrera Panamericana. It also managed second and fourth places at its first outing, the Mille Miglia in 1952.

These successes, especially those on the high speed open road races, were rather surprising as the engine then was fitted only with carburetors, producing 175 hp (130 kW), which was not only less than the competing cars by Ferrari and Jaguar, but also less than the road car of 1954. Low weight and low aerodynamic drag made the 300SL fast enough to be competitive in endurance races.