The Mercedes-Benz GLK (codename X204; Geländewagen Luxus Kompaktklasse) is a compact luxury crossover SUV released as a 2009 model elsewhere and as a 2010 model in North America after its public debut at the 2008 Beijing Auto Show alongside the competing Audi Q5.

It is a concept vehicle demonstrating GLK's dynamic performance on the tarmac. The vehicle was unveiled in 2008 North American International Auto Show

The vehicle's design was heavily influenced by the Mercedes-Benz C-Class.

The GLK-Class shares the C-Class (W204) platform, and production plans continued after the demise of the similar Smart Formore. The vehicle was unveiled in Auto China 2008

The GLK-Class is not sold in RHD markets such as the United Kingdom, due to a driveshaft used to operate the front wheels on 4WD versions of the GLK. It is positioned such that it encroaches slightly on the right-hand-side footwell.

The vehicle was unveiled in 2008 Geneva Motor Show show.

Mercedes-Benz USA partnered with four tuners to develop custom designs based on the upcoming 2010 GLK-Class vehicles, as part of the US launch of GLK-Class SUV in 2009.

The Four Corners Rock Crawler is based on GLK 350 4Matic, built by Legendary Motorcar Company. The design was inspired by the idea of turning the GLK into an interactive snowboarding car. It included a gasoline-powered tow winch, stainless steel bar roof with swing-out side-mounted grinding rails, Perspex panel fitted to the roof, increased ride height by 38mm via custom-made spacers on the lower control arm at the rear and billet aluminium spacers at the front, 18-inch Jesse James Black-Widow rims with Toyo Open Country AT mudder tires, stock interior The vehicles were unveiled in 2008 SEMA show, followed by 2008 Los Angeles Auto Show.

It is a concept car based on the RennTech Rally Racer built for 2008 SEMA show. It included an updated body kit with 3M 1080 Scotchprint textured automotive vinyl wrap in brushed steel (1080-BR201) and black carbon fiber (1080 CF-12) colours with subtle red pin stripping. The vehicle was unveiled in 2011 Pittsburgh International Automotive Show. 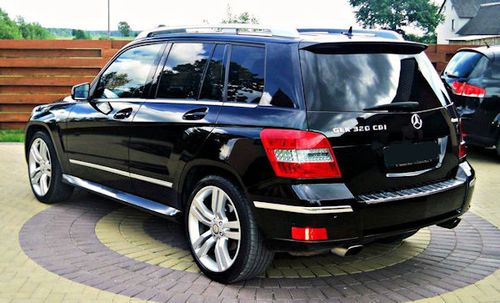