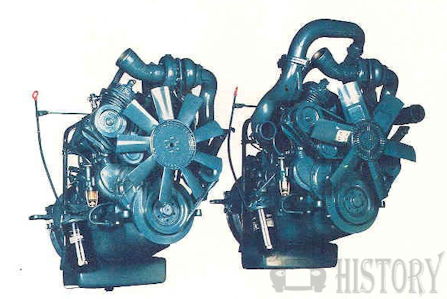 The Mercedes-Benz OM 300 (small) series comprises several generations of four- and six-cylinder inline engines, which were mainly produced for driving light to heavy trucks. The origins go back to the time around the Second World War.

Even before the war, Mercedes-Benz was represented in all market segments for trucks, but its own 3-tonne L 3000 was clearly too expensive and too heavy. Reason for the high weight was considerably the built-up diesel engine OM 65/4 75 bhp at 2250 min -1 . In the class of light trucks with three tons of payload, the Opel Blitz was by far the market leader, this had a six-cylinder gasoline engine with 3.6-liter displacement, was light and cheap to manufacture, and also reliable and robust. For a competitive light truck Mercedes-Benz needed a small and light diesel engine. The engine should therefore with 3000 min -1 an unusually high rated speed This was a risk in many ways at the time.

The development began around 1938 and was completed around 1941. Due to the war, the production facilities could no longer be procured, also Mercedes-Benz was obliged in 1942 to produce the Opel Blitz under license. At the end of the war, the production facilities for the engine of the Opel Blitz were completed and largely undestroyed. The problem was the same as before the war: needed a light truck and a matching engine. Under the deficiency conditions of the early post-war period, the engine and existing production equipment had to be adapted to one another.

Immediately after the Second World War , the medium-duty truck L4500 was initially continued unchanged, d. H. with the pre-war engine OM67 / 4. 1954 received the engine with unchanged displacement (and otherwise unknown changes) the designation OM325; previously, the pre-war engine was already used to derive the larger capacity and more powerful OM315. In 1956, the OM326 was followed by an even stronger engine with four valves per cylinder.

The Blitz engine had only four crankshaft main bearings, two cylinders each because of the lack of main bearing closer together than the cylinder with intermediate bearing. The pre-war R6 engine OM 302 was further developed: The seven crankshaft main bearings remained, the cylinder spacings were adapted to the manufacturing equipment and therefore uneven. The OM 312 was finished. A reasonably thorough test was only possible because the L 3250 vehicle did not finish until one year later than planned.

In 1954, a turbo-charged version of the OM 312 for special vehicles was added. Due to the then poor reliability of turbochargers and the low level of acceptance among customers, the more powerful OM 321 based on the OM 312 was introduced at the same time for normal freight traffic, followed by two turbocharged versions two years later.

The OM 322 was later the last version of these engines with prechamber injection , a variant of the OM 321 with modified bore and modified stroke. The tight space associated with the pre-chamber caused significant thermal problems in the engine, so that at the end of its production period, the loss ratio was still more than ten times higher than the direct injection in the first year of production.

With the OM 352, the era of direct injection was heralded in 1964 for this engine series. There have already been tests for over ten years. He replaced all his predecessors, and it therefore also reduced his performance. After a quarter of a century before the development work on this series had begun with a four-cylinder, followed in 1965 with the OM 314, the first four-cylinder diesel engine in the sales program. This was identical except for the number of cylinders with the OM 352 and for the new light trucks with Cubic cabin easily . The four-cylinder were very uncultivated, but the engines were very reliable and for the first time this was also true for the following turbo engines.

In 1983, OM 314 / OM 352 was thoroughly reworked and launched as OM 364 / OM 366. This was made necessary by the tightened environmental legislation, which promoted the transition to smaller numbers of cylinders with turbocharging and intercooling . Further tightened emissions limits then made in the 1990s finally a new development necessary, the 900 series.

The OM 312 is a standing rows - six cylinder - four cycle - Two valve - diesel engine with indirect injection and water cooling . The cylinder block of the engine is potted with the split crankcase and made of nickel alloyed cast iron . The cylinder liners are cast in the block. With a cylinder bore of 90 mm and a piston stroke of 120 mm, the engine has a total displacement of 4580 cm³. Forged in the cylinders are forged pistons made of light metal from Mahle with four compression rings and two oil scraper rings, The power is transmitted via slanted connecting rods with bearings made of lead bronze with steel support shells on a forged and hardened at all bearings crankshaft, which is stored seven times in lead-bronze plain bearings, also with steel support shells in the crankcase. It is equipped with six counterweights and a vibration damper.

In the crankcase runs a four-fold mounted in plain bearings down camshaft , which is driven by helical spur gears. It operates via plunger , bumpers and rocker arm, the vertically suspended valves. Each cylinder has an inlet and an outlet valve. The valves are suspended in a removable cast-iron cylinder head covering all cylinders. Towards the cylinder block, an asbestos-containing cylinder head gasket is installed.

For lubrication, a pressure circulation lubrication is used, which is maintained by a gear oil pump. The oil filter is installed in the main stream. The oil is cooled by an oil cooler with a temperature controller. The fuel is pumped out of the tank with a fuel pump and cleaned with a felt tube filter. The fuel is then pumped to the Bosch PES 6 A70 B 410 RS 64/7 injection pump, which is supplied via Bosch DNO SD 211 injection nozzlesinjected into the antechamber. A centrifugal speed governor limits the maximum speed. The air is sucked in front of the radiator and cleaned with an oil bath air filter, which also dampens the intake noise of the engine. The motor is cooled with a tube cooler whose warm air is blown away by a fan.

The power output of the engine was initially 66 kW, but was increased from 1956 by an increase in compression, speed and other control times to 74 kW.

The OM 352 is a series - six cylinder - four cycle - Diesel engine having two valves , and water cooling , substantial difference from the OM 322 and 321 is the direct injection into the piston recess. The cylinder block of the engine is cast from molybdenum-chromium-alloyed special cast iron, the crankcase is made of alloyed special gray cast iron. With a cylinder bore of 97 mm and a piston stroke of 128 mm, the engine has a total displacement of 5675 cc. The pistons are forged pistons made of light metal from Mahle , each with three compression rings and two oil scraper rings, The power is transmitted via diagonally split con rods of tempered steel with double T-section on a forged and hardened at the bearings, seven-bearing crankshaft. Connecting rod and crankshaft have three-part bearings with steel support shells. The crankshaft is equipped with counterweights and vibration dampers.

The crankcase is fitted with a hardened tempered steel camshaft mounted four times in slide bearings, which is driven by helical gears via helical gears. It actuates the hanging valves via bumpers and rocker arms . Each cylinder has an inlet and an outlet valve. The cylinder head made of molybdenum-chromium-alloyed special cast iron covering all cylinders is sealed with an asbestos-containing cylinder head gasket to the cylinder block.

The pressure circulation lubrication works with a gear oil pump and an oil filter in the main flow and an oil filter in the bypass flow. The fuel is filtered through a felt tube filter and injected into the piston recesses with injection pumps of type Bosch DLLA 150 S 187 using a Bosch PES 6 A70 C 410 RS 2085 injection pump . The injection pump has a centrifugal speed controller. The air is cleaned with an oil bath air filter. The engine is cooled with a tube cooler, whose warm exhaust air blows off a fan.