The McLaren Senna is a super sports car from McLaren with a four-liter V8 mid-engine built since 2018.

The vehicle was first shown to the public in March 2018 at the 88th Geneva Motor Show . The senna is limited to 500 copies, which were sold out even before the official presentation. The super sports car is built by hand in Woking, UK . The vehicle is named after the 1994 fatal accident racing driver Ayrton Senna .As the McLaren P1 is one of Senna for "Ultimate Series" of McLaren. The last vehicle was auctioned at a private event for McLaren customers. The proceeds went to Instituto Ayrton Senna .In late March 2019 Lego presented a replica of the Senna in original size. The 467,854 building blocks assembled 30 model makers in 2725 hours. Weighing around 1.7 tonnes, the Lego model weighs around 500 kilograms more than the production vehicle. It is also possible to get into the model, but it is not fit to drive.

The car is the latest addition to the McLaren Ultimate Series, which combines the design and construction philosophy of the F1 and P1 models , without however being the direct heir of these two cars. Its existence was unveiled online, by the manufacturer, on December 10, 2017.  The official presentation of the car took place shortly after at the 2018 Geneva Motor Show . All models of this car will be handcrafted at the McLaren Production Center in Woking , Surrey , England , with a production limited to a total of 500 units. The name of the car is dedicated to the driver Brazilian three-time Formula 1 world champion Ayrton Senna . The performance declared by the house is an acceleration time from 0 to 100 km / h in 2.8 s and a top speed of 340 km / h. 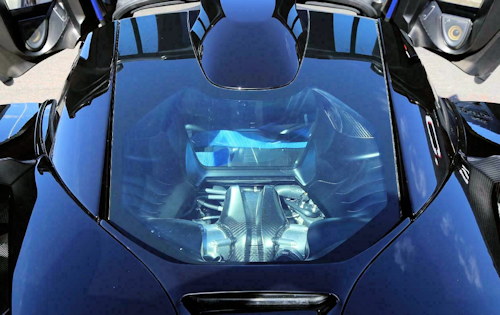 The Senna is largely based on the design of the 720S , using modified versions in the carbon fiber monocoque and in the engine, a 4.0-liter twin-turbo V8 called M840TR, with a 7-speed dual-clutch transmission, which transmits to the rear wheels a maximum power of 800 HP (according to DIN regulations ; 789 BHP according to SAE regulations ) and a maximum torque of 800 Nm. Unlike the original design, the Senna does not use an electric motor and weighs only 1,198 kg, thus allowing to obtain a weight / power ratio of approximately 658 BHP / ton (668 HP / t in the SI ).

The car's bodywork is enriched with countless carbon fiber aerodynamic surfaces, with the presence of a large dual element rear wing, a dual element diffuser, a Formula 1 inspired roof vent , air intakes front and side, rear slits and large front mudguards shaped according to aerodynamic optimization. Inside the front air intakes there are also small airfoils of the mini-canard type. The areas of the bodywork where a lowering of air pressure is induced are combined with high-performance radiators, shaped to combine low aerodynamic drag and great heat dissipation capacity .

The Senna uses a new generation of Brembo self-ventilated and carbon-ceramic disc brakes , whose construction material contains a new specific compound, which has a thermal conductivity 3.5 times higher than the 720S brakes, thus making it possible to build less brakes. bulky and lighter; in addition, there is a new set of alloy wheels, of the single-nut type with central locking, which fit Pirelli P Zero Trofeo R tires .

The chassis is a new generation carbon fiber monocoque (called MonoCage III), designed to contribute to the overall lightness of the car. The interior of the cabin features exposed carbon fiber, with seats that can be upholstered in Alcantara or leather. Behind the two seats is a space large enough to store a pair of helmets and racing suits.

Also at the Geneva Motor Show 2018 McLaren presented the Senna GTR an even more exclusive version of the sports car. This is limited to 75 units and not street legal. The GTR is the racing version of the Senna . The car has an estimated power of 814 hp. The bodywork differs from the road version for the wider front and rear fenders, for the wider front spoiler, and for the large rear diffuser as well as for various aerodynamic appendages. The downforce total generated through these measures is 1000 kg. In addition, the tires are wider and the tailpipes have been moved to the sides of the car, just before the rear wheels. In September 2020, McLaren's MSO department built the one off Senna GTR Le Mans. 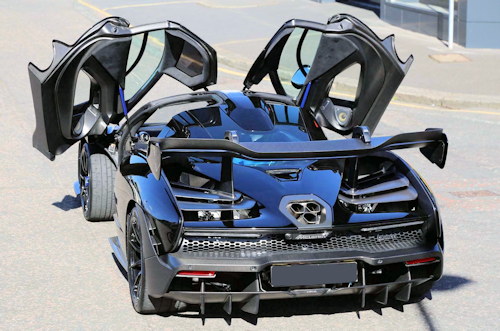