The vehicle is based on the McLaren 650S and was presented at the Geneva Motor Show 2015. The suffix "LT" is an allusion to the F1 GTR "Longtail" called racing version of the McLaren F1 . The production of the 675LT was limited to 500 copies.

At the end of 2015, a 675LT Spider called Roadster model was presented. This variant was also limited to just 500 vehicles.

As with the 650S, the LT 675 makes use of single cell mono shell in carbon fiber by weight of 75 kg , and the use of carbon fiber in the vehicle is increased in order to further minimize the weight and increase the structural rigidity of 'car. The LT 675 is supplied with brake discs in carbo-ceramic to increase the performance of brakingcompared to the 650S. The implant is made up of discs that are 394mm at the front and 380mm at the rear. The calipers are six-piston for the front discs and four-piston for the rear ones. The performance of the braking system is also aided by the braking ability that occurs through the air friction of the new rear wing.

The 675LT features a new 10-spoke wheel design , each weighing 800g less than the alloy wheels on the McLaren P1 , 19- inch at the front and 20-inch at the rear.The new wheels are fitted with Pirelli P-Zero Trofeo R road tires focused for track use, which increase grip on asphalt by up to 6% compared to the P-Zero Corsa fitted to the 650S.

The 675 LT uses a 50% larger rear wing than that used in the 650S, along with a new carbon fiber diffuser and an 80% larger front splitter , with side aerodynamic deflectors which together increase the total downforce by 40. %. 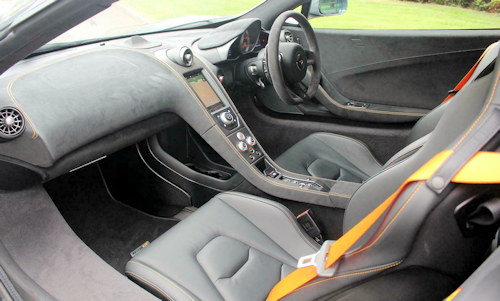 The new carbon fiber pieces include both front and rear bumpers , as well as the front hood , rear fenders , side intakes which contribute to significant weight savings in comparison to the 650S. L ' Alcantara is used throughout the interior, where it is removed the carpet and the air conditioner and new are mounted seats racing carbon fiber that together they save 26.5 kg. The windows are 1 millimeter thinner which further reduces the weight by 3 kg. This extreme focus on weight savings translates into a dry weight of 1,230 kg, about 100 kg less than the 650S.

The car is powered by a motor McLaren M838T variant from 3,799 cc twin- turbo V8 to gasoline , which produces 675 hp at 7100 rpm and 700 Nm of torque at 5500 revolutions per minute. This is achieved by adding new lightweight connecting rods , custom-made cams, an electronic recirculation valve and a lightweight titanium exhaust . Also in the engine come the turbocharger and the fuel pump , optimizing them and making them more efficient.

The 675LT uses a seven-speed dual-clutch automatic transmission already used in the 650S, with an improvement in the management software by reducing the shifting and downshifting time.

Limited to 25 copies special edition is equipped with the engine of the McLaren 675LT, whose performance was increased by 13 hp, the maximum torque is still at 700 Nm. Visually, the 688 HS was upgraded with a fixed rear wing, revised side skirts and front apron. The weight was lowered by 40 kg compared to the 675LT At the Geneva Motor Show 2017 McLaren presented the successor 720S . 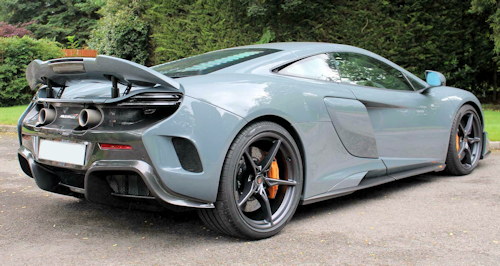