The Mazda CX-3 is a compact sport utility vehicle (SUV) made by Japanese carmaker Mazda . In November 2014, it was first presented to the public at the Los Angeles Auto Show . The premiere in Europe took place at the Geneva Motor Show in March 2015.With 4 Stars in the Euro NCAP crash test in 2015/

The CX-3 is based on the same platform as the Mazda2 and is only available in a body version with four doors and five seats.

It is powered by a 1.5-liter diesel engine with 77 kW (105 hp), as well as a 2.0-liter gasoline engine with gasoline direct injection , which is available in two output levels - with 88 kW (120 hp) and 110 kW (150 hp). All engine variants offer Mazda's SkyActiv technology and a start-stop system . SkyActiv technique means u. a. a 14: 1 compression, aluminum alloy engine block , multi-hole injectors and less friction.

By February 2011, Mazda claims to have claimed more than 130 patents. The model is available with either a six-speed manual or a six-speed automatic transmission. Also can be selected between standard front-wheel drive and the available at extra cost permanent four-wheel drive.

The highest level of equipment ( Sports Line ) also includes a head-up display . This can be equipped on request with Matrix LED headlights . Standard equipment is there as in the Exclusive-Line full-LED headlights.

In 2017, the CX-3 underwent a slight restyling with a technological update and some technical changes, especially on the suspensions. With the arrival of the traffic sign recognition system or intelligent braking aid in urban mode  . The four-wheel drive versions receive the i-ACTIV AWD system.

End march 2018, Mazda presents the second restyling of the CX-3 at the New York Auto Show . This includes a grille with double slats, new 18-inch rims, 100% adaptive diode lighting and an electric handbrake on the tall versions 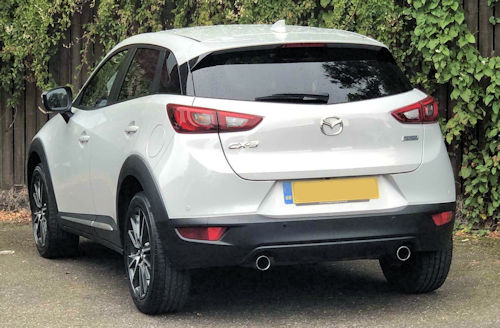