The new model has been for sale since summer 2005. It is now sold as the Mazda5 in all markets apart from Japan. While classified by Mazda as a mid-sized wagon, it competes with other vehicles classed as Compact MPVs in Europe, and is viewed as a mini-minivan in the United States. It is based on Ford's global C1 platform, meaning it shares many parts with the Mazda3. The Mazda5 replaced the Mazda MPV as Mazda's minivan offering in most export markets.

The Mazda5's closest relative is the European compact MPV, Ford Focus C-MAX, though the Mazda5 uses minivan-style sliding doors in the rear while the Ford has four conventional front-hinged doors. This version of the vehicle was also introduced for sale in the United States, making it the first compact minivan in that market since the 1994 Mitsubishi Expo (in the United States) and 1995 Nissan Axxess (in Canada). The Mazda5 is marginally larger than the 1984–1989 Toyota Van. Competition joined the North American MPV market in 2006 with Mercedes-Benz's B200 (in Canada and Mexico) and in 2007 Kia Motors followed suit with the 2007 Kia Rondo (in the United States and Canada).

In North America, due to safety regulations, the Mazda5 fits six passengers using three rows of seats, with two seats per row. Elsewhere, it is sold as a seven seater using Mazda's "Karakuri Seating System", which means the car has three rows of two seats, with the seventh seat a fold away jump seat in the centre of the middle row. The Mazda5 has three-point seat belts on all seven seats. 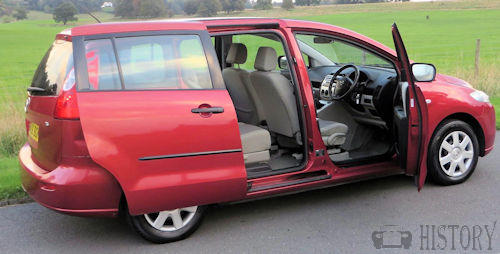 For the 2006 model year Mazda offered fewer Mazda5 options than in other markets. The North American version lacked the front-to-back roof rails that were included as standard in other markets. Other notable Mazda5 options not offered in North America included a back-up camera, power-assist side doors and even a choice of engine (2.3 L only). A second-row DVD entertainment system was eventually offered as a dealer installed add-on. Mazda produced a limited number of Mazda5 units featuring all-wheel-drive but this version was not made available outside of Japan for the 2006 model year.

For 2008, the Mazda Premacy/Mazda5 received a mid-cycle refresh with updated front bumper, wheels and rear LED lights for Touring and Grand Touring trim levels. The automatic gearbox was updated to five-speed. The interior received a few changes to the dash including luminescent gauges, an updated radio control layout with auxiliary input, a rear A/C vent, and center console, and a full set of armrests for the first and second seating rows on North American models. Mazda first released the 2008 Mazda Premacy in Japan, with other markets to follow.

For 2010, Mazda added electronic stability control and traction control to the Mazda5, safety features that were formerly cited as oversights on the vehicle. 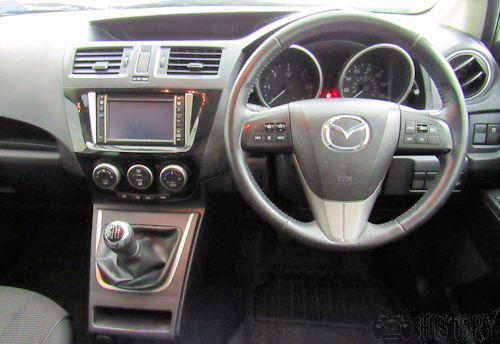 The Mazda5 was named "Best New Multipurpose Family Vehicle" in the 2006 Canadian Car of the Year awards. Consumer Reports ranked the Mazda5 as the best "tall wagon" in their test, though the car failed to gain a "recommended" rating due to unknown reliability.

In April, 2006, the Japan New Car Assessment Program (J-NCAP) awarded the Mazda5 a maximum six-star rating for front-occupant crash worthiness. In Europe, the Mazda5 was awarded a maximum five-star "adult occupant" safety rating in September 2005 by the Euro-NCAP. 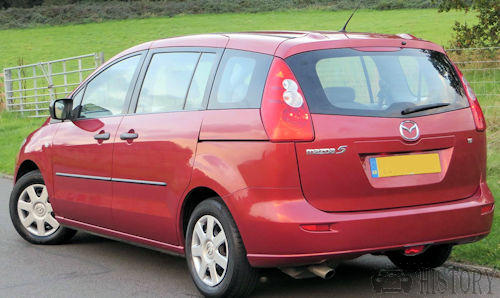