1997 brought the sixth-generation Capella, now on the GF platform. The Mazda Cronos name was retired and the Capella, 626, and Telstar once again shared a common platform. All-wheel drive was optional in Japan. North American 626's were again built by AutoAlliance International in Flat Rock, Michigan, and had an entirely different body and differing engine options from 626's sold in the rest of the world. Once again, the station wagon version used a slightly modified, carryover platform (now called GW). The wheelbase was 60 mm (2.4 in) longer than the sedan, and a V6 engine was offered. This time though, the bodywork was the same, minimizing confusion for buyers.

By now, Ford had decided to reintroduce European models in Australasia so the Mondeo replaced the Telstar in most markets though the latter was still sold in Japan. The Capella was lightly updated in 1999 with a new interior and exterior, cabin air filtration, an available turbodiesel engine, a new Activematic manually operated automatic transmission, and available EBD and DSC. 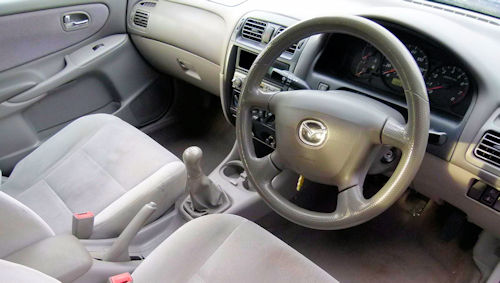 The North American market 626 was different from those sold in other countries. The Michigan-built 626 retained the doors and other body parts of the preceding 626, which made for a somewhat awkward design lacking the aggression which could be seen in the 626/Capella as built for the rest of the world. It was also considerably larger and heavier. LX and ES models were available, with both 2.0 and 2.5 V6 engines. Unusual amongst its competitors, the V6 was available with a manual transmission.

From 1998 through 1999 the 626 was given an engine overhaul to give it better pedal feel. However, as most car reviews attested, it is a bland vehicle with softer handling and fewer features than the 1993–1997 version. Here is one such quote from Edmunds: "A bland, bread-and-butter sedan that's not big enough for families and not sporty enough for enthusiasts." Along with a nearly invisible facelift, front side airbags were new options for 2000, as were larger wheels, four-wheel discs, and rear heat ducts. The four-cylinder engine was also upgraded by 5 hp (3.7 kW).

The final Mazda 626 rolled off the Flat Rock, Michigan assembly plant on August 30, 2002 but in Columbia they were still being produced until 2006.