The fourth-generation Capella was released in May 1987 It used the updated GD platform and some versions remained in production in Japan until 1996. Engines were new, though they still emphasized torque rather than outright power. Most of the world received 1.6, 1.8, 2.0, and 2.2 (non-turbo) engines. The GT model had a 2.0-liter FE-DOHC engine that produced 148 (non-cat) or 140 PS (cat). Some models were available with a new 2.0 diesel RFT engine, notable for its use of a pressure wave supercharger (Comprex), that previously could be found in the Mazda Bongo commercial. Diesel models were also exported to Europe, usually with the naturally aspirated engine. By 1990, the 1.6 had been discontinued in most markets, although JDM models intended for commercial use still used the little B6 engine.

The 626/Capella was available globally as a sedan, station wagon (estate), five-door hatchback, and as a coupé - although the coupé was renamed MX-6 for the North American and Australian markets. In Japan, the five-door was sold as the "Capella CG" (for City Gear) and the coupé as the "Capella C2" (Composite Coupé). There was also a four-door hardtop sedan with unique bodywork, sold only in Japan, called the Mazda Persona.

The station wagon version, intended as a true load carrier, was introduced the spring of 1988 on a slightly modified platform (called the GV). The station wagon also had a seven-seat option in some markets. Five-speed manuals and four-speed automatics were offered, with a few export markets also receiving a four-speed manual.Four-wheel drive was introduced in July 1987 for some versions, although it was never made available in the coupé nor in the North American market. Another new option was 4-wheel-steering, introduced in February 1988, with Mazda's system being electronic and more complex than the 4WS system introduced by Honda on their 1988 Prelude. This system was only available in the five-door and the coupé. While not particularly successful in the marketplace, Japanese consumers could choose this option for longer than could export customers. All of the body styles also had optional ABS. The final facelift made a driver's side airbag an option for the buyer.

The 626 line was face-lifted for 1990. The Station Wagon (Estate) was still available up until November 1997 (1996 in export markets). As part of a Japanese trend at the time, it was also developed into an "RV", a sporting model with off-road pretensions. The Capella Van version, for commercial use only, actually continued in production until 1999. When the new CG Capella was introduced in August 1994, the "Capella Cargo" received a facelift with a bigger grille and headlights and its name was changed to "Capella Wagon".

The MX-6 was built in Michigan alongside its platform-mate, the Ford Probe at AutoAlliance International, while North American market 626s were still imported from Japan. 626 hatchbacks disappeared after 1991 from the US Mazda model range. The base model now used Mazda's 110-horsepower 2.2 L 3-valve SOHC F2 producing just 10 hp (7.5 kW) shy of the old Turbo, and the new Turbo was up to 145 hp (108 kW).

The 1988 introduction of four-wheel steering to the 626 Turbo liftback, along with Honda's Prelude 4WS, marked the first 4WS systems for the American market. It was later also made available to the MX-6. In 1990 the 626 gained motorized seat belts.

Mazda New Zealand again assembled a range of four-door sedan and five-door hatchback models, supplemented by the newly available wagon, and imported the coupe and a top five-door version, both with electronically controlled rear-wheel steering. Ford New Zealand's Telstar line was similar, including the wagon and imported rear wheel steer models, but without the coupe. The wagon's arrival enabled Ford to drop the UK-sourced Sierra wagon from local assembly, simplifying model sourcing.

The NZ-specification cars, though imported CKD, shared much of their specifications with European models including the modified tail lamp assemblies with the mandatory-for-Europe fog light lenses though the bulbs and wiring were not included. This and later generations would also be imported used from Japan in later years, greatly widening the choice of models and specifications available in this market. 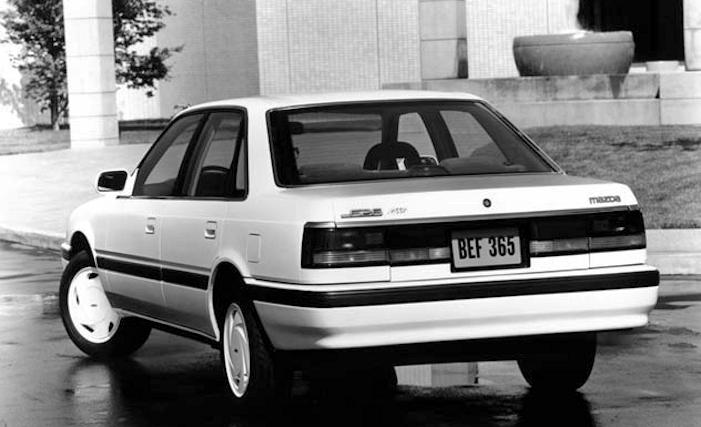