When it came to redesigning the Revue, Mazda came up with a tall hatchback, minivan-esque package (the Revue was already over 1,500 mm (59.1 in) tall). Introduced in a time full of negative press coverage, the Demio became a surprise hit for Mazda in Japan, and also foreshadows the current crop of B-segment minivans such as the Opel Meriva, Fiat Idea and the Renault Modus.

Production of the new Demio started in July 1996 (sold as the 121 outside Japan) used the DW platform. Ford retailed a version in Japan as the Ford Festiva Mini Wagon. In 1998, the Mazda logo was changed from the previous logo to the current logo. The Demio was updated in 1999 with a revised exterior, cabin air filtration, retuned automatic transmission, and available DSC due to a 2002 redesign.

The original DW model was produced in Mazda's Colombia plant as "Mazda Demio" until the end of 2007, where it was replaced by DE Mazda2. 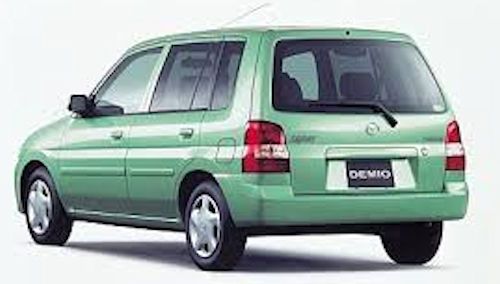