The Familia AP (323 in most of the world, GLC or Great Little Car in North America) debuted in January 1977 as a rear-wheel-drive subcompact, replacing both the Grand Familia (818) and the preceding Familia (1000/1300). There was a choice of hatchbacks and station wagon bodies, both available with a 3- or 5-door bodystyle. The Station Wagon/Van version was a bit later, first being introduced in June 1978, which also meant that the commercial versions based on the 1970 Familia could finally be retired. Three Mazda engines were available, the 985 cc PC, 1,272 cc TC, or 1,415 cc UC. The little one-liter unit was only made for export markets. The new Familia shared many parts with the older Mazda Grand Familia. This was the first appearance of the 323 name, for export markets only.

In June 1979 the 323/Familia underwent a facelift, replacing the previous round headlights with rectangular units which were designed as a single unit along with the grille. Other minor differences occurred along with the facelift. In South Africa a 1,600 cc model was available – however this model did not have a Mazda engine, unlike the rest of the range. To satisfy that country's local content regulations, a Mitsubishi Saturn 1.6-litre unit was used.

The range was replaced in 1980, however the station wagon models continued in production until 1986. In 1981 a facelift was given to the wagon range, to give a front end treatment similar to Mazda's front-wheel drive 323/Familia range.

It was available in several body variants:

Several of these were available in several trim levels.

A five-speed manual gearbox was introduced later as an alternative to the original four-speed manual gearbox. At the same time the original 7-inch (178 mm) round sealed beam headlights were replaced with square sealed beam units on all models except the van, together with a general styling and mechanical upgrade. A three-speed automatic gearbox was also available throughout the model run.

When the next generation front-wheel-drive Familia/323/GLC models were released in 1980, the wagon and van models continued unchanged, due to Mazda not developing wagon models for the newer range. A facelift however was given to the wagons in 1981, which gave the models the front clip (albeit with different bumpers) of the front-wheel-drive models. Production of the wagons continued to 1986, when a new front-wheel-drive model was introduced. Originally available with the 1.3 litre TC and 1.4 litre UC engines, the larger unit was replaced with the new 1.5 liter E5 engine for the 1983 model year.

For the United States, the GLC, advertised as the Great Little Car, was only offered with one engine at a time. The new GLC overlapped with the old-style Mizer for part of 1977 and was produced through 1980 before being replaced by the next-generation GLC. The marketing campaign in the U.S. had the words "Great Little Car" set to the tune of Spanish Flea.

In Indonesia the Familia was marketed by IndoMobil Group as the Mazda MR90 (hatchback) between 1990 and 1992, Baby Boomers (hatchback) between 1993 and 1995, and as the Vantrend (station wagon) between 1993 and 1997. The versions built by Mazda Motor Indonesia used the larger Mazda 626's "GC" platform, and later versions had modernized headlights (same as on the North American market GC 626) and bumpers. Only the UC 1.4-litre engine was offered, in combination with a five-speed transmission. 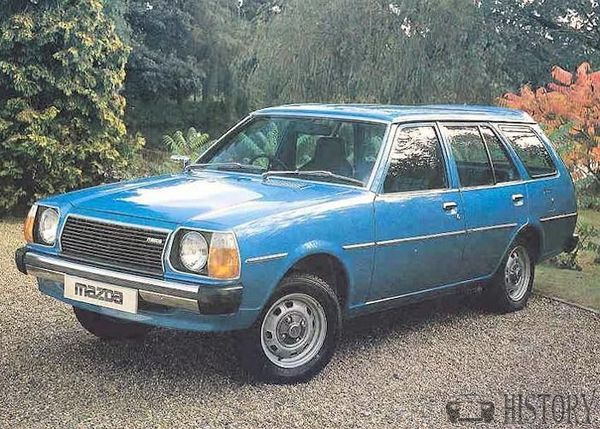