The Mazda CX-5  is a compact/small-family crossover SUV produced by Mazda starting in 2012 for the 2013 model year lineup. It is Mazda's first car featuring the new KODO - Soul of Motion Design language first shown in the Shinari concept vehicle in May 2010. It is also the first vehicle featuring the company's full Skyactiv Technology suite, featuring a rigid, lightweight platform, combined with a new series of efficient engines and transmissions resulting in reduced emissions and fuel consumption. The Skyactiv Engine and Transmission Technologies were released in the 2012 Mazda3 compact sedan and hatchback. 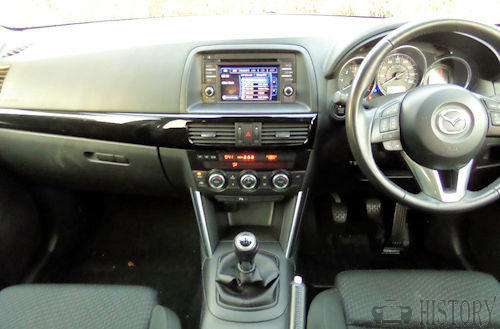 The design was based on the Mazda MINAGI.

The model was first shown at the September 2011 Frankfurt Motor Show.

Early European models include choice of SKYACTIV-G 2.0 and SKYACTIV-D 2.2 engines.

The U.S. version of the CX-5 debuted at the Los Angeles Auto Show. The only engine available is a direct-injected, 2.0-liter four-cylinder Skyactiv-G gasoline engine with 155 bhp (116 kW; 157 PS), which is less than the 163 bhp (122 kW; 165 PS) first reported. However, it is rated at 26 mpg city and 32 mpg highway with automatic transmission and 26 mpg city and 35 mpg highway with manual transmission.

The Japan domestic market CX-5 achieved monthly sales 8 times higher than forecast right after its launch in February 2012, with the "clean diesel" (as it is referred to in Japan) model accounting for 73% of these.

The Mazda CX-5 replaces the utilitarian Mazda Tribute in the compact SUV segment, which had become among Mazda's less charismatic offerings, and the Mazda CX-7.

Car of the Year Award

To promote the CX-5, Mazda teamed up with Universal Pictures for their strategic partnership in support for the launch of the movie, Dr. Seuss’ The Lorax, and Mazda launched a co-branded national Dr. Seuss’ The Lorax-themed commercial spot based around Mazda’s SKYACTIV TECHNOLOGY. 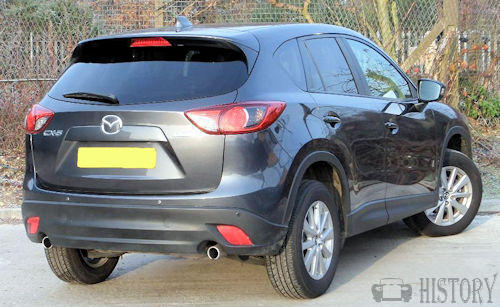