The Mazda Étude was originally a luxurious three door hatchback coupé version of the BF (fifth generation) Mazda Familia/323, only ever marketed in Japan. The name was also later used in South Africa for the seventh generation Mazda Familia.

The Étude looked similar to the 323/Familia, but was a bit longer and had a lower roofline, providing a generally more suave appearance - like a 323 in a tuxedo. It was marketed as a "personal coupé" and received very full equipment (sliding sunroof, two-tone paint, power steering and windows, etc.) coupled with a more comfort oriented suspension than did sedans. The B- and C-pillars were blacked out and the greenhouse had an entirely flush surface, helping to differentiate it from its more staid siblings. This styling feature was called "Terraceback" by Mazda.

The car was first introduced in January 1987 with the 1.6-liter twin cam engine in three different trim levels, from the bottom Li via the Si to the top Gi spec. Target sales were 2,000 per month, but in the eleven months it was on sale in 1987 only about 6,000 made it onto the market. A lesser 1.5-litre base version (1.5 Sa) was added in July 1988, at which time a number of brighter colours were also added to the existing silver and white options. The Sa's spec was midway between the Li and Si. Nominally a five-seater, the rear seat was clearly designed to be comfortable for two.

Although Mazda had gone to some lengths to try to differentiate the car from the regular Familia particularly the inside felt less than special. When the Familia was redesigned in March 1989 the Étude ended production, but sales of remaining stock continued for a while. When it finally disappeared without fanfare, just under 10,000 had been built. The car's de facto successors were the Mazda Familia Astina (323F) and Autozam AZ-3/Eunos Presso coupés (known as the Mazda MX-3 in export markets). 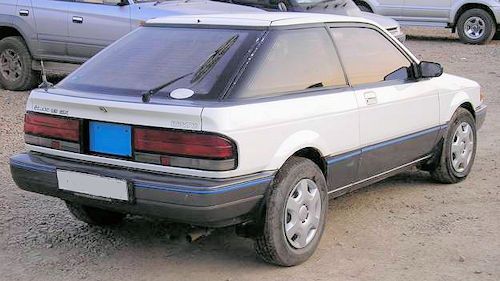