The Mazda CX-9 is a full-size crossover SUV manufactured by Mazda at the Ujina 1 plant in Hiroshima Prefecture, Japan.

The CX-9 is built on the Ford CD3 Platform that is shared with the Ford Edge, and it uses the same 3.7 L V6 engine used in the Ford lineup. Although outwardly similar, the CX-9 and Mazda CX-7 do not share platforms. The CX-9 has either a front-wheel drive or all-wheel drive configuration.

It was also selected for the North American Truck of the Year award at the Detroit Auto Show in January 2008.

Auto Week noted that "compared with other midsize utes, the CX-9 is responsive and has great steering. It almost feels sporty, but not quite though."

The CX-9 has tri-zone climate control and a Bluetooth hands-free interface as standard features. The more expensive Touring and Grand Touring trims include leather inserts in the upholstery as well as higher end audio and rear DVD entertainment systems.

For the 2013 model year, the CX-9 received a refresh that included a new grill, new headlights, and restyled front vents. Power is still delivered via the Ford-sourced, 3.7 V6, making 273 hp and 270 lb. ft. of torque, mated exclusively to the 6 speed automatic transmission. 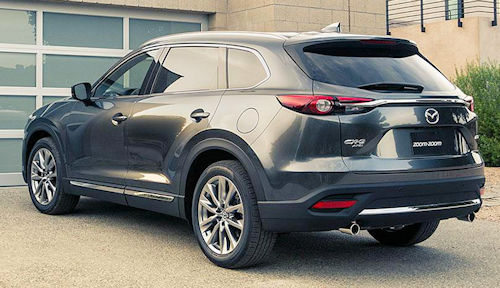