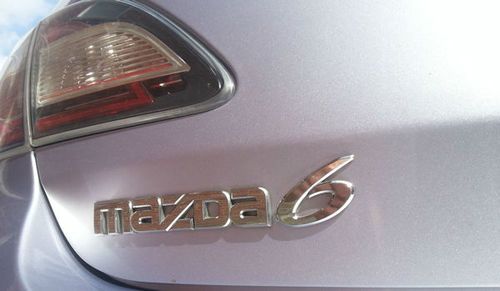 The model lineup consists of a four-door saloon, a five-door hatchback and a five-door Estate, marketed in North America as the "Sport Sedan", "5-Door" and "Sport Wagon", respectively. In Australia, the lineup starts with Limited, available only as a saloon. Then comes the Classic, available in saloon, hatch or estate. The Luxury model is next available in saloon and hatch versions. Topping the range is the Luxury Sports model, available only as a hatch. In New Zealand the lineup consisted of 2.0L GLX (saloon only), 2.3L GSX (saloon, hatch, and estate), and the range-topping 2.3L Limited (saloon and hatch). The lead stylist for this model generation was Moray Callum.

Drivetrain combinations include the Mazda MZR engine in configurations of 1.8 L (L8-DE), 2.0 L (LF-VE) and 2.3 L (L3-VE), initially with a five-speed manual or four-speed automatic transmission (with sequential-automatic option, dubbed the "Four-Speed Sport AT"). In the US domestic market a 3.0 L Duratec 30 V6 engine is also available with a five-speed manual or five-speed automatic (with sequential-automatic option, dubbed the "5-Speed Sport AT"). European and Australian versions also feature a four-cylinder turbodiesel that comes with a six-speed manual transmission and produces significantly more torque than the V6, with much improved fuel economy.

Just as before the Mazda 626 was renamed to Mazda6 Atenza, Ford continues to use the Mazda's G-series platform for the basis of a number of its CD3 platform coded vehicles, including the Ford Fusion, Mercury Milan, Lincoln Zephyr/MKZ, Lincoln MKX, and a range of SUVs and minivans. Ford also plans to offer a hybrid powertrain on the platform. The official Mazda chassis codes are GG (saloon/hatch) and GY (estate) series - following the 626/Capella in its GF/GW series.

The 2006 Mazdaspeed Atenza (known as Mazdaspeed6 in North America and Mazda 6 MPS in Europe, South Africa and Australia) is a high-performance version of the Mazda 6. Its mission statement was written with the help of Peter Birtwhistle, chief of Mazda's advanced design studio in Germany at the time. It was initially unveiled as a concept at the 2002 Paris show. It features a turbocharged version of the 2.3 L MZR I4 which produces 272 PS (200 kW) (European version is detuned to 260 PS (191 kW); the North American version, at 274 hp (204 kW), revised to 270 hp (200 kW) for 2007). All models have 280 lb·ft (380 N·m) of torque. This 2.3 L DISI turbocharged engine features direct fuel injection and conforms to the new Euro 5 emissions standards. It has a revised front fascia with a raised hood, a 6-speed manual transmission, and all-wheel drive. The all-wheel-drive system uses Mazda's Active Torque Split computer-based control, which routes up to 50% of the power to the rear wheels depending on driving conditions. The Mazdaspeed Atenza competed with the Subaru Legacy GT and less directly with the compact Subaru Impreza WRX STi and Mitsubishi Lancer Evolution.

Originally scheduled to be launched in June 2005, the Mazdaspeed Atenza was delayed until November. In North America, the Mazdaspeed6 comes in two trim levels; the "Sport" trim with cloth interior and standard key entry and ignition; and the "Grand Touring" trim with leather interior, keyless entry/ignition, and an optional DVD navigation. Automatic climate control is standard, as is a 200 W Bose stereo system featuring seven speakers and a 9-inch subwoofer in addition to an in-dash six-disc CD changer. A sunroof with moonroof feature is optional on the Grand Touring trim.

The Mazda6 second generation made its premiere at the 2007 Frankfurt Auto Show in September.

The new Mazda6 is based on the Mazda GH chassis platform, a revised version of the GG chassis which Ford also still uses as their CD3 platform. Mazda continues to provide three body styles, including 4-door saloon (sedan), 5-door hatchback and wagon. A number of journalists have already praised its electrically assisted steering for being considerably improved compared to the last generation, providing more feedback to the driver. The hatchback model even has a trunk space which beats the larger rival Ford Mondeo and Opel/Vauxhall Insignia (hatchback) by 200 liters with rear seats folded down.

The North American version was redesigned for the 2009 model year. It is a widened and lengthened version of the model sold elsewhere, with larger engines. Reviewers have noted its coupe-like roofline and sportier style. North American engine choices include a new 2.5-liter 4-cylinder and North American versions get the 3.7-liter V6 which is also available in the Mazda CX-9. Motor Trend recorded a 0-60 mph acceleration time of 6.1 seconds for the Mazda 6 V6.

For the North American version, only a sedan model will be available (In Middle East, USDM Mazda 6 known as Mazda 6 Ultra is sold alongside the JDM Mazda 6). A Mazdaspeed 6 variant has not been announced. Despite the North American version's increase in dimensions, Mazda maintains that the 6 retains the overall driving experience is still sportier than rivaling Accords, Camrys, or Malibus. Early reviews have been favorable.

The third generation Mazda6 was unveiled during Moscow International Motor Show in late August 2012. It's design has been extremely well-received, and was a finalist in the "2013 World Design Of The Year."

Currently, all 2014 Mazda6's are powered by a 2.5 liter, inline-4 cylinder engine, producing 184 hp and an EPA rating of 38 mpg highway (with 6 speed automatic). A 2.2 diesel will be offered sometime in the second half of 2013, but final details regarding the engine have not been released.

The 2014 Mazda6 recently won a Motor Trend comparison against the 2013 Honda Accord Sport and 2013 Toyota Camry SE.

Production of all North American models will be transferred to Hiroshima, Japan, due to ongoing efforts to increase global manufacturing efficiencies.