The first version of the RX-8, chassis code SE3P, and JM1FE, was produced from model year 2003, though the car's U.S. debut was the 2004 model. It is powered by the RENESIS 13B-MSP (multi side port) Wankel 654×2 rotary engine displacing 1.3 litres non-turbo (1308 cc). At launch, the RENESIS was available in standard and high power versions. The 4-port standard RENESIS produced 191 hp (142 kW) and was coupled with either a 5-speed manual or 4-speed automatic transmission. The 6-port high power RENESIS was only available with a six-speed manual transmission and was rated at 250 hp (186 kW). For the North American market, Mazda revised the reported output rating of the standard and high power RENESIS soon after launch to 197 hp (147 kW) and 238 hp (177 kW), respectively. With exhaust ports now located in the side housing, the RENESIS boasted improved fuel efficiency and emissions rating over the 13B-REW employed by the last RX-7, thereby making it possible to be sold in North America. 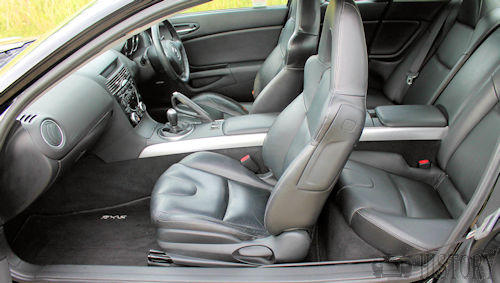 At launch, the RX-8 was available in various models in different markets around the world. Standard models include:

Automatic versions all had lower output/lower rpm engines due to the lack of availability of a transmission that would be able to reliably cope with the engine's high rpm limits.

In 2005, Mazda introduced the first special edition RX-8 called "Sports Prestige Limited" in Japan and "Shinka" in North America. Shinka takes its name from the Japanese word meaning "transformation" or "evolution" Billed as a more luxurious grand touring model, this Shinka came with Black Cherry exterior color and Parchment leather interior along with subtly chromed 18" wheels. Only 1357 were made in the 2005 model year (though 2150 were scheduled, production never reached that amount). The most significant mechanical change were slightly revised Bilstein shocks and suspension cross member injected with urethane foam to improve ride quality.

Launched in 2006 the ‘Evolve’ was the first special edition for the UK. The new model was named after the original Mazda concept car seen in Detroit in 2000 and was limited to a production run of just 500.

In May 2006, the Mazda released the RX-8 PZ for the UK market. This car was jointly developed with motorsports company Prodrive. Only available in six-speed manual, it featured custom 10-spoke alloy wheels supplied by Italian F1 team supplier OZ Racing in "Dark Silver" finish, mirrors developed to reduce drag, front and rear black mesh grilles, and a rear spoiler to provide more stability at higher speeds. Both the wheels and rear wing are badged in carbon fiber with "Prodrive." Significant revisions were also made to the suspension to improve the handling: dampers from Bilstein and coil springs from Eibach are used in addition to reducing the ride height by 15 mm (0.6 in) and an increase in spring rate of 60%. Finally the car was supplied with a unique upgraded twin exhaust system, with exhaust tailpipes branded "Prodrive." Only 800 were made at an MSRP of £25,995 ($51,990). It was available in two colours, Galaxy Grey (320) and Brilliant Black (480).

The 'Nemesis' model is the 3rd special edition model launched in the UK and is a UK exclusive. It was launched in 2006, although some cars were registered in 2007 due to stock runoff. The ‘Nemesis’ features unique paint colours and interior trim, plus an exclusive accessory package, at a cost that was at the time £330 less than the model on which it is based - when similarly specified. Based on the standard 192 PS (141 kW) version of the Mazda RX-8, it included a unique stone leather seat trim interior and came with a five-speed manual transmission. The Nemesis has several other unique exterior and interior features. Two exclusive colours were available, Copper Red Mica and Stormy Blue Mica, each Nemesis also comes with a polished aluminium Rotary crest on the front air dam, polished aluminium side air-outlet trims behind the front wheel arches, special B-pillar trims with a Rotary crest and ‘Nemesis’ badging. Inside these special edition models also featured Nemesis branded luxury carpet mats and Mazda RX-8 branded aluminium door scuff plates. Like other standard 192 PS (141 kW; 189 hp) RX-8s, the Nemesis has front fog lights, heated front seats, electrically-operated driver’s seat, climate control air-conditioning, nine-speaker BOSE premium audio system with 6-CD auto-changer, plus a black leather-wrapped steering wheel, gear knob and hand-brake lever. The Nemesis has a top speed of 139 mph (224 km/h) and accelerates from 0 to 60 mph (97 km/h) in 7.2 seconds. Each Nemesis buyer also qualified for a complimentary Prodrive experience day. Just 350 examples were commissioned, 200 in (5,080 mm) Copper Red and 150 in (3,810 mm) Stormy Blue.

In 2007 Mazda released a UK-only limited edition known as the Kuro (Japanese for Black). While the drivetrain remains the same as standard models, it did receive a revised interior as well as minor changes to its head and tail lights. It was only available with a light grey leather interior and Sparkling Black Mica exterior paint. The car was limited to 500, with a scuff plate denoting the serial number out of 500.

2007 saw the release of a special edition to celebrate the 40th anniversary of Mazda's rotary engine. The 40th Anniversary special editions were different in the Japan and North American markets. The Japanese version came in Marble White as an homage to the Mazda Cosmo Sport, which was initially only available in white. The North American version came in Metropolitan Grey Mica exterior with the interior clad in special Cosmo Red leather. It also had wheels of a new design later incorporated in the 2009 facelift, as well as an exclusive sport-tuned suspension with Bilstein dampers. Further upgrades included an enhanced urethane foam injected front cross member intended to improve steering feel. In North America, this special edition was available only in 2008.

At the 2004 North American International Auto Show, Mazda unveiled the RX-8 Hydrogen RE concept car, designed to run on either hydrogen or gasoline. In February 2006, Mazda revealed that it would start leasing a dual fuel RX-8 to commercial customers in Japan, and in March 2006 announced its first two customers, claiming the first fleet deliveries of a dual hydrogen/gasoline production car. In 2008 30 RX-8 HRE were delivered to Hynor.

Following suit with the Roadster, Mazda introduced the NR-A/Party Race program for RX-8 in Japan in 2004. The NR-A kit, sold through Mazda dealers, brings the RX-8 up to spec in terms of eligibility for participation in the one-make Party Race sanctioned by the Japan Automobile Federation (JAF). The kit includes roll bar, sports radiator, oil cooler kit, tow hooks, and racing brake pads, and was only available for the Type S (high power) model. 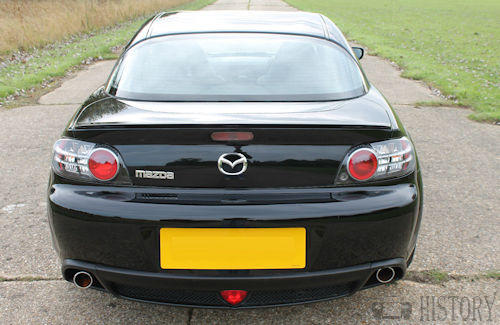