The Mazda Verisa is a subcompact car based on the jointly-engineered Mazda DY platform. It was launched by the Japanese automaker in 2004 and is only available in Japan. The Verisa can be considered either a 'tall hatchback' or a 'low mini MPV'. The relationship between the Mazda Verisa and the more popular Mazda Demio is similar to that of the Ford Fusion (Europe) and the Ford Fiesta. Its height of 1,530 mm (60.2 in) is similar to other Japanese boxy subcompact cars and lower than European mini MPVs like the Fiat Idea and Opel Meriva.

According to Mazda the name Verisa was created by combining the Italian word 'verità' (truth) with the English word 'satisfaction', and the intended result of the term Verisa is to signify 'true fulfillment'. The car is built with the watchwords “simple, quality and compact” and is targeted towards couples in their 30s with individual style and values. There is a Japanese website that shows the Versia factory and shop options.

The Verisa comes in front wheel drive (2WD) and electronic four wheel drive (e4WD) configurations. There is one engine option that delivers the following power and efficiency figures:

The Verisa received updates in 2006and 2009. Two special editions of the car have been released, the 'Brown Collection' in 2005 and the 'Stylish V' in 2007. A second generation is expected to be released in 2011. The car has gained international admirers who question why it has not been made more widely available.

Used Verisas have been exported however, to some left-hand-traffic countries including New Zealand, although it is not widely available. 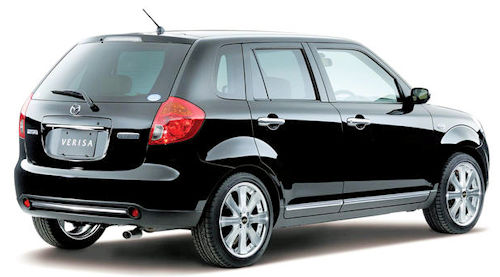