The Mazda6 second generation made its premiere at the 2007 Frankfurt Auto Show in September.

The new Mazda6 is based on the Mazda GH chassis platform, a revised version of the GG chassis which Ford also still uses as their CD3 platform. Mazda continues to provide three body styles, including 4-door saloon (sedan), 5-door hatchback and wagon. A number of journalists have already praised its electrically assisted steering for being considerably improved compared to the last generation, providing more feedback to the driver. The hatchback model even has a trunk space which beats the larger rival Ford Mondeo and Opel/Vauxhall Insignia (hatchback) by 200 liters with rear seats folded down.

This model of the Mazda6 was awarded 2010 Family Car of the Year by What Car? magazine.

The North American version was redesigned for the 2009 model year. It is a widened and lengthened version of the model sold elsewhere, with larger engines. Reviewers have noted its coupe-like roofline and sportier style. North American engine choices include a new 2.5-liter 4-cylinder and North American versions get the 3.7-liter V6 which is also available in the Mazda CX-9. Motor Trend recorded a 0-60 mph acceleration time of 6.1 seconds for the Mazda 6 V6.

In America, only a sedan model was available (In Middle East, USDM Mazda 6 known as Mazda 6 Ultra is sold alongside the JDM Mazda 6). A Mazdaspeed 6 variant was not offered. Despite the North American version's increase in dimensions, Mazda maintains that the 6 retains the overall driving experience is still sportier than rivaling Accords, Camrys, or Malibus. Early reviews have been favorable.

On March 3, 2011, around 50,000 Mazda6 vehicles from the 2009–10 model years were recalled in the United States, with another 15,000 in Canada, Mexico and Puerto Rico after it was found that Yellow Sac Spiders were building nests in the fuel line of the vehicles.The Mazda6 has two pipes coming from its gas tank, an extremely rare configuration. The amount of gasoline vapor in the fuel line is just strong enough to draw the spider in but not strong enough to kill it.

The basic equipment that is standard across all versions of the Mazda 6 Saloon (07-13). 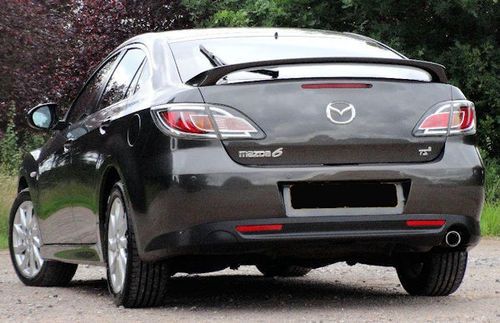