The third generation Mazda6 was unveiled during Moscow International Motor Show in late August 2012. Its design has been extremely well-received, and was a finalist in the "2013 World Design Of The Year."

In Australia, the Mazda6 is sold with a 2.5l SKYACTIV-G petrol or 2.2l SKYACTIV-D twin-turbo diesel 4 cylinder engine, offering 138kW/250Nm and 129kW/420Nm respectively. The popular hatch of the first and second generation models is no longer offered, leaving a sedan (in Sport, Touring, GT and Atenza trim) and wagon (Sport, Touring and GT). Transmission options include Mazda's 6speed Skyactiv automatic as well as a 6 speed manual. Notably, Mazda's SKYACTIV technologies have reduced the petrol model's fuel consumption from an official figure of 8.9L/100km (5 speed auto) for the previous generation to 6.6L/100kms, a 25% improvement.

The diesel's fuel economy gain was less marked, from 5.9L/100km for the previous manual transmission-only diesel model to 5.4L/100km for the new automatic-only offering.

The 2.5L producing 184 hp and with an EPA rating of 38 mpg highway (with the 6-speed automatic). A 2.2 liter diesel will be offered sometime in the second half of 2013, but final details regarding the engine have not been released.

Production of all North American models will be transferred to Hiroshima, Japan, due to ongoing efforts to increase global manufacturing efficiencies.

In North America, the Mazda6 will be available in three models: the Sport, Touring, and Grand Touring. While all three models offer their own distinct features, all of the models will offer these features as standard equipment:

In early 2014, the Mazda6 will offer the SKYACTIV SKYACTIV-D diesel I4 engine, which is the same engine used in the Mazda6 race car raced in the Rolex 24 racing series, but with less horsepower and torque. It is a detuned version of that engine. The engine is already avaliable on both the Asian and European models of the all-new Mazda6. 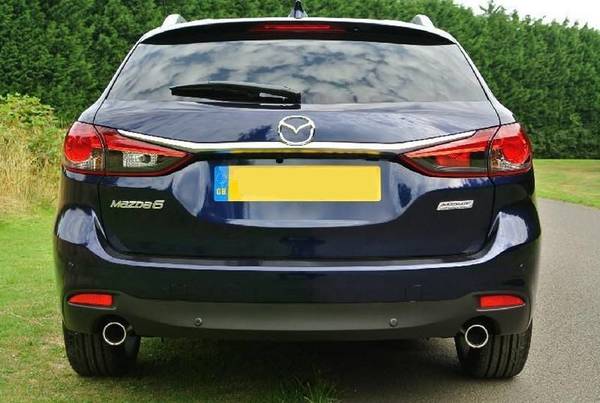