When Kei car regulations were changed for 1976, due to shrinking sales in the category, Mazda did not think it a worthwhile expenditure to develop a new, clean 550 cc engine. Instead, they discontinued the Chantez passenger car and the Porter pickup, and began buying Mitsubishi's 2G23 engines to equip the Porter Cab. The Porter Cab was stretched by 200 mm (almost entirely behind the rear axle, with the 1,835 mm (72.2 in) wheelbase remaining) and widened by 100 mm (3.9 in). Dimensions were now 3,195 mm (125.8 in) x 1,395 mm (54.9 in), and the 546 cc Vulcan S two-cylinder developed 31 PS (23 kW) at 5,500 rpm. The headlight bezels were squared off, lending the car a more conventional appearance.

The second generation Porter Cab was only available in a bright blue color with light grey trim (bumpers, headlight bezels) and black interior, until the 1983 facelift after which only white was available. The facelifted version gained the cleaner Vulcan II engine (G23B), although power output remained the same. Trim pieces were now in a darker grey, interior brown.

In 1985 there was another minor facelift, with trim pieces now in black and a black band between the headlights. The engine switched from a timing chain to a timing belt, and the interior changed to gray. Air conditioning was now available as an option. In 1987 the Mitsubishi Minicab received Mitsubishi's new three-cylinder engine, but the Porter Cab had to soldier on with the old two-cylinder. In June 1989, after twenty years of continuous production with nothing more than facelifts, the Porter Cab was finally retired. It was replaced by the Autozam Scrum, a mere badge-engineered Suzuki Carry. 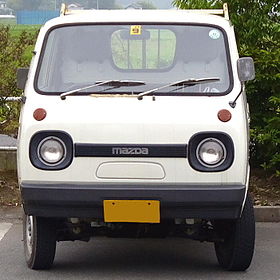