The Maybach Zeppelin was the Maybach company's Repräsentationswagen   model from 1929 to 1939. Named for the company's famous production of zeppelin engines prior to and during World War I, it was an enormous luxury vehicle which weighed approximately 6600 lb. This weight was so great that German drivers required an additional goods vehicle licence for vehicles over 2½ tons Along with the Voisin, and behind the Daimler Double Six, this was Europe's joint second luxury V12 car in production.

Karl Maybach's engine was a long-stroke design, with dimensions of 86×100 mm.The crankshaft had eight main bearings, one being a smaller outrigger at the rear, supporting the camshaft drive gears. In a novel feature for reduced noise, these were made of Novotext, a resin-impregnated fibre composite. A further novel feature was the use of enlarged four-bolt main bearing caps on three of the bearings. 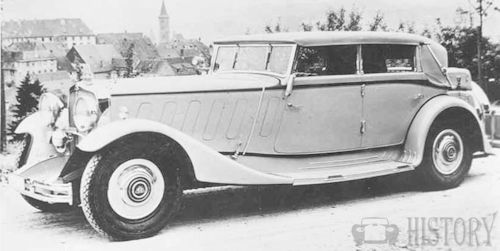 In August 2012, a 1938 DS8 Roadster sold for €1.3 million at auction, fitted with a rare Variorex eight-speed gearbox with a vacuum shift and is thought to be one of only 100 built.

When Maybach was revived as a brand by DaimlerChrysler, old Maybachs, particularly the opulent 8-litre Zeppelin, saw new popularity as part of a marketing effort which sought to link the current brand with the heritage of the original car company.This resurrecting of the classic name resulted in increased visibility and popularity of well-restored or preserved Maybachs.