The Maserati Ghibli was a sports car of the Italian car manufacturer Maserati , which was manufactured from autumn 1966 to the end of 1973. The name of the car is derived from the Gibli , a hot desert wind of the Sahara .The Maserati Ghibli was presented to the public at the 1966 Turin Motor Show. In the autumn of 1966, the sale began, with the first cars were delivered in early 1967. The production of the Ghibli lasted until the end of 1973. Maserati produced suspension and engine, the body, however, was manufactured at Vignale  and Ghia.

The name Ghibli also carry other vehicles from Maserati. Between spring 1992 and the end of 1997, a descendant of the Biturbo family was named so and since 2013, a notchback sedan of the upper middle class is sold as Ghibli . However, these vehicles have nothing to do with the Ghibli of the 1960s.

In the 1960s, Maserati entered the market of six-cylinder sports cars with the Maserati Sebring and the later introduced Mistral . In addition, the company had until 1964 with the Maserati 5000 GT a very high-priced, high-performance coupe with an attributable to a racing engine eight-cylinder engine on offer. From 1963 Maserati expanded the model range of eight-cylinder vehicles. After the Quattroporte , a four-door sports sedan, appeared in 1966 with the Maserati Mexico a two-door, four-seater Gran Turismo, both of which were equipped with a reduced-power version of the well-known eight-cylinder engine. What was missing at first was a two-seater sports car. This role was taken over by Ghibli, which was introduced in the autumn of 1966 and internally received the type designation AM 115.

A special charm of the Ghibli was its sensational body. She was the first draft, by Giorgetto Giugiaro after his departure from Bertone for the Carrozzeria Ghia realized.  Giugiaro needed only three months for the draft; He still considers the Ghibli to be his most beautiful creation today. The design was based on a study that Ghia on the 1964 Turin Motor Show.

Giugiaro designed a flat body with long bonnet, short passenger compartment and a striking hatchback. The exceptional length of the bonnet - similar in proportions to the Jaguar E-Type - was a deliberate stylistic device, with which Giugiaro claimed to "emphasize the presence of the strong machine". In addition to the long hood dominated especially the long sloping rear of the image of the Ghibli, which housed a large rear window and ended only at the height of the waistline. The front bumpers were thin; they captured the low, barred radiator grille across the entire car front. The rear bumpers ranged far around the fenders. The Ghibli carried electrically operated pop-up headlights; in the unfolded state the headlight units broke through the flowing lines of the car front clearly. At the rear, the tail lights of the Alfa Romeo Giulia were initially used, later the larger units of the Alfa Romeo 1750/2000 .

In November 1968, the Ghibli Coupé was complemented by a two-seat Spyder, which was also designed by Giugiaro. The car front corresponded to that of the coupé; the body had been modified at the rear. The close-cut fabric hood of the Spyder could be completely folded down; it disappeared under a metal cover when it was not needed. For the Spyder was a factory hardtop made of metal was available.

Maserati equipped the Ghibli with a slightly revised version of the eight-cylinder engine, which had already debuted in 1956 with the Tipo 450S in racing and since 1964 found in Quattroporte use. Unlike in the case of the four-door, however, the engine here had a dry sump lubrication with separate oil tank. Only with this construction, the flat front end of the left Ghibli realize  First, the Ghibli received 4.7 liters of large version of the engine, which - depending on the measurement - gave 310-330 hp. In 1970, the Maserati Ghibli SS 5000 was added, which was enlarged to 4.9 liter displacement version with a power output of 335 hp. This engine was exactly the same size as the Maserati 5000 GT. The Ghibli reached a top speed of 270 km / h. 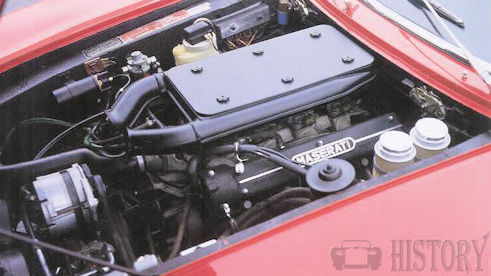 The Ghibli had a self-supporting steel body with box-shaped subframe. The basic construction corresponded - apart from the slightly reduced dimensions - that of the Maserati Mexico and thus of the Maserati Quattroporte. While the front wheels were suspended individually, Maserati used a rigid axle at the rear , sourced from the UK by the Salisbury Wheel Company . The rear axle was guided by leaf springs and a Panhard rod . The simplicity of the rear axle construction has been repeatedly criticized in the literature; the handling of the car was sometimes referred to as "rugged". Although Maserati had temporarily considered equipping the Ghibli with the De Dion rear axle of the Quattroporte; Road tests with such a retrofitted prototypes will have but does not improve the drivability,  so that Maserati this design feature, regardless of the fact that Italian competition vehicles such as Ferrari 365 / GTB4 "Daytona" naturally on all wheels on independent suspension retained until the production cessation of the Ghibli .

For transmission, a manual five-speed transmission from ZF was offered as standard , which was derived in its basic concept of the power transmission of Hanomag Kurier and supplemented by a fifth gear. From 1968, was next on request, a three-speed automatic transmission by BorgWarner available. In addition, a power steering  again by ZF - could be ordered, which made it easier to deal with what was often considered to be cumbersome vehicle  .

Regardless, created in eight years, a total of 1,250 copies, the coupe was by far the more frequently produced version: on 1,124 coupes came only 125 Spyder. Famous owners include from the time, Sammy Davis Junior , Henry Ford II and Peter Sellers . 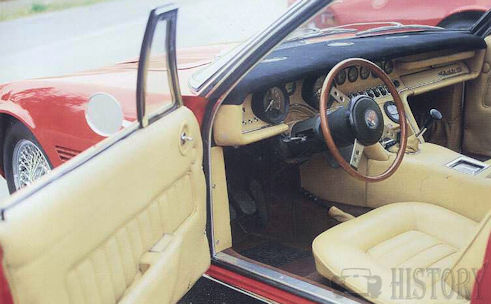