The Maserati 228 (later 228i ) is a four-seater sports car produced by the Italian automaker Maserati from early 1986 to spring 1992, which belongs to the Maserati Biturbo family . The designation 228 related to the number of doors (two) and engine displacement (2.8 liters). The vehicle was presented to the public on December 14, 1984, the 70th anniversary of the founding of Maserati, although mass production only began in early 1986. The vehicle was designed as Gran Turismo and stood in the tradition of some years previously set Maserati Kyalami, It had been developed primarily for the American market, where the conventional biturbo was mostly perceived as too small.

The 228 was a two-door coupe on the longer wheelbase of the four-door Maserati twin turbo models (2600 mm). The shape of the 228, which went back to Pierangelo Andreani , based on the smaller biturbo, but seemed due to the increased length stretched and elegant. The front end was distinguished by the bumpers standing over the bumpers, which protrude laterally around the fender. The design of the front end was deliberately oriented towards the very successful BMW 6 Series in the USA . The chrome grille was more pronounced than the small twin-turbo models. The interior used high-quality fabrics, leather and woods. 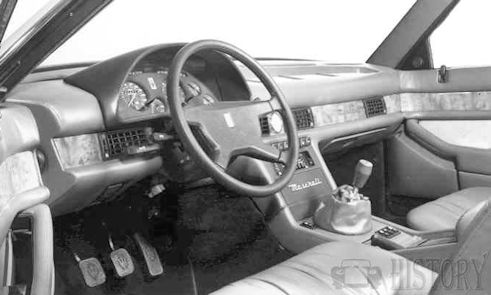 Was driven the 228 initially by a 255-hp 2.8-liter V6 with Weber carbs and two IHI - turbochargers , which were first liquid cooled here. Although initially four valves per cylinder and dual ignitionwere planned, was used in the series engine with single ignition and three valves for each cylinder. As standard, a five-speed manual transmission was delivered, on request there was a three-speed automatic transmission. 1986 debuted the 228i, in which the mixture preparation was carried out now by an injection system. The power was 250 hp or, in catalyst version, 224 hp. In 1988, the three-speed automatic transmission was replaced by a four-speed unit. Maserati put the engine of the 228 in 1988 also in the export version of the smaller coupes, which were sold as 222 E , 222 SE and 222 SR .

In commercial terms, the Maserati was not a success. By spring 1992, only 469 vehicles. Much of the production was exported to the United States of America. The lack of success of the vehicle is mostly attributed to inadequate product management and too much stylistic similarity to the small biturbo models. The vehicle is usually treated only superficially in the brand's literature today; some otherwise complete works entirely do without a description of the model. 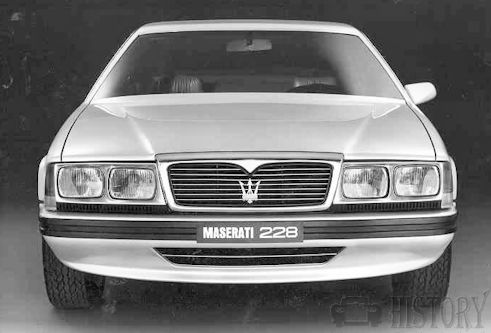