The Maserati Mistral was a luxury sports car, produced by the Italian automaker Maserati from 1963 to 1970. The car was initially called Maserati 3500 GT 2posti and was available as a coupe as well as a convertible.The in-house designated as Tipo AM 109 car was developed under the direction of Giulio Alfieri . The goal was to construct an answer to the Jaguar E-Type .

The vehicle was presented in November 1963 at the Turin Autosalon . On the occasion of the presentation it appeared with the model name Maserati 3500 GTI 2Posti. The name Mistral was officially used only from 1966. The inspiration came from the French Maserati importer Colonel John Simone. The name refers to the wind of the same name , which is noticeable in the lower rhone valley. It justified the existing until the 1990s tradition of naming Maserati vehicles after winds. Mass production of Mistral began in spring 1964. It lasted until 1970. During this time, 828 coupes and 123 convertibles were built.

The body of the vehicle was designed by Pietro Frua . Frua repeatedly used the Mistral design for later assignments: Both the British AC 428 and the Swiss Monteverdi High Speed ​​375 S are considered copies of the Maserati Mistral. Initially, the Mistral was only available as a two-seater coupe with a large tailgate. From 1965 the coupe a two -seater convertible with the name Spyder was set aside, for which either a hardtop was available.The Maserati Mistral had a body made of pressed sheet steel. Only the doors and the bonnet were made of aluminum.

The car had a stand-alone chassis that had no relation to the chassis of the Maserati 3500 GT . It consisted of tubes with a rectangular cross section; the rear area was designed as a box frame.The wheelbase was about 20 cm shorter than that of the 3500 GT coupe; and undercut the wheelbase of the 3500 GT Spider by 10 cm. The suspension corresponded to the 3500 GT.

The Engine was initially the 3.5-liter inline six-cylinder, which was also used in the previous model. This made 235 hp. In 1964 he was replaced by a 3.7-liter version, which offered a 10 hp higher performance. This engine remained until 1969 in the program. From 1966 was optionally also a 4.0 liter and 255 hp version of the six-cylinder engine available. The Mistral was the last Maserati with the classic straight-six of the house; all later models had six- or eight-cylinder V-engines.

The production process was complicated. At Maserati, the engine and the chassis were created, while the body panels were pressed in Turin by the Carrozzeria Maggiora . The chassis were transported by lorry from Maserati to Maggiora, where the body was welded to the chassis. Then the vehicles were brought to Modena to the Officine Padane , where the painting work was done and the windows, the electrical system and the interior was installed. Finally, the cars came back to Maserati. Here, in a final step, the engine, the suspensions, the gearbox and the brakes were installed.

The Maserati Mistral (Tipo 109), named after a cold northerly wind of southern France, was the successor to the iconic 3500 GT, it was also the first in a series of classic Maseratis to be given the name of a wind. It was offered both in Coupe and Spyder form. 830 coupes and 120 Spyders were built in total. Maggiora of Turin supplied both bodies under contract.

The Mistral is the last model from the "Casa del Tridente" or “House of the Trident” to have the famous straight six cylinder, twin-spark, double overhead cam engine, as fitted to the Maserati 250F Grand Prix cars that won 8 Grand Prix between 1954 and 1960 and one F1 World Championship in 1957 driven by Juan Manuel Fangio. The engine also featured hemispherical combustion chambers and was fed by a Lucas indirect fuel injection system which was novelty at the time for Italian car manufacturers. Although the Lucas fuel injection system enhances performance, quite a few owners, especially in the U.S. have converted their cars to Weber carburetors due to difficulties in tuning the system properly. Maserati subsequently moved on to V8 engines for their later production cars. 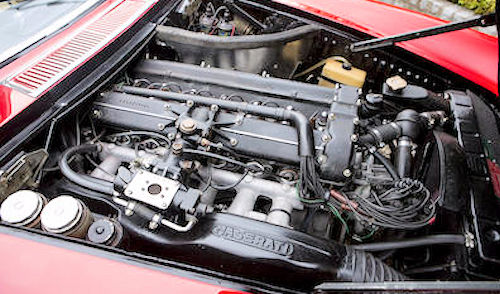 There were three engine variants fitted to the Mistral; 3500, 3700 and 4,000 cc. The most sought after derivative is the 4000 cc model. Only the earliest of the Mistrals were equipped with the 3500 cc engine. Unusually, the body was offered in both aluminum and steel but no one is quite sure as to how many of each were built. Use of the aluminum body panels had no effect on the performance of the Mistral. The mixture of the aluminum body on a steel substructure can lead to corrosion due to the dissimilar metals. The automobile was standard with a five speed transmission from ZF and also had four wheel solid disc brakes. As was Maserati's practice at the time the front suspension was independent while the rear made do with a solid axle. Speed for the 3.7 liter engine and the 4.0 liter engine was around 7 seconds or a little better and the top speed was around 140 mph (225 km/h) to 145 mph (233 km/h). When leaving the factory the Maserati Mistral originally fitted Pirelli Cinturato 205VR15 tyres (CN72).

The body which had been designed by Pietro Frua was first shown in a preview at the Salone Internazionale dell'Automobile di Torino in November 1963. The Maserati Mistral is generally considered as one of the most beautiful Maserati of all time. It is also often confused to the very similar looking but larger and more powerful AC Frua, which was a Frua design as well.

More information on
Maserati Mistral car history from 1954 to 1970