Maserati 3500 series was to replace the A6G2000 with a faster, more practical, and more popular model, the Orsi organisation directed Ing. Alfieri to design a new car around a detuned derivative of the 350S sports-racing engine. The result was the 3500, which went on sale in 1958, and which was to be made in higher tune, and with different body styles, until 1964. Even then the six-cylinder engine would be used in other Maseratis built in later years.
The chassis was much the same in general layout as that used on previous Maserati road cars, and had definite affinities to the general layout of other current Italian models. The skeleton was a tubular frame, though in the case of this particular Maserati there was also a goodly modicum of pressed steel stiffening and torsional members.

As with Ferrari, Maserati considered that nothing more ambitious was required for the rear suspension than a live axle and half-elliptic leaf springs, just so long as that was controlled by radius arms. Mechanically, however the 3500 was something of an 'assembled' car, for the twin-cam 3485cc engine was backed by a four-speed ZF gearbox and by a Salisbury axle, with Alford and Alder suspension, Girling brakes, and many other proprietary items. There was no gainsaying the 3500's performance, however. Even in its initial tune, it was offered with a massive 230bhp (net), and this was before the Lucas fuel-injection, which was to characterise this model, was introduced in the early 1960s.
There was a whole variety of coachwork on offer, from the usual Maserati-linked body building houses, but from the end of the 1950s the vast majority of all coupes were supplied by Touring, and almost all the open Spiders came from Vignale. Although strictly not applicable to this volume, it is worth noting that the 3500 evolved into the Sebring in 1962, that the similar Mistral followed from 1963, and that the last of all was built in 1970. 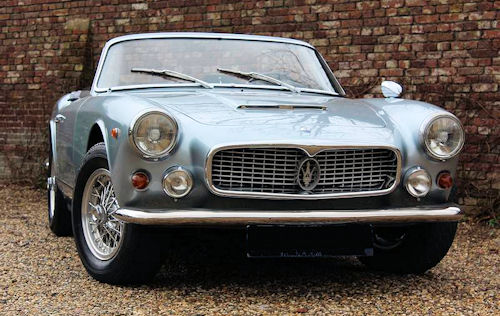 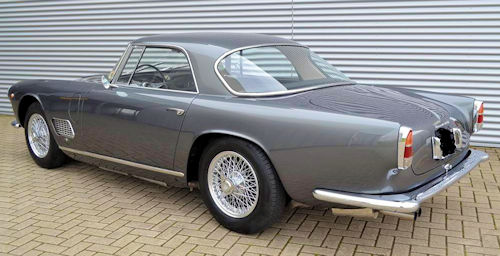