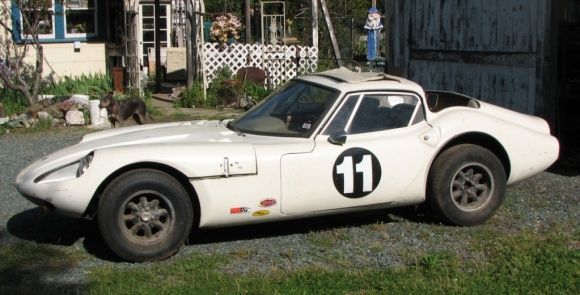 Marcos started out with race cars, with the first Xylon cars being built specifically for the 750 motor club races. Among the drivers were Jackie Stewart, Bill Moss, John Sutton, Jack Gates, John Mitchell and Jackie Oliver, as well as Jem Marsh. The young Jackie Stewart achieved 4 victories in 1961, while Bill Moss managed 9 victories in 10 starts (link). John Sutton won the 1961 Autosport Championship, and together with Jack Gates and John Mitchell, Marcos won the team prize.

When the car went into production as the Luton Gullwing many examples were bought for racing. In 1962 Stephen Minoprio was the Autosport 1000cc GT Champion in his Gullwing - setting 7 lap records in the process.

The Gullwing in turn evolved into the GT Fastback, also known as the 'Breadvan'. All 18 fastbacks made in 1963 went into racing, and like the Xylon and Gullwing they were FIA homologated in the GT category. However, without the gull wing doors the fastback's were awkward to get in and out of. Drivers included Jackie Oliver, Terry Sanger, and Derek Bell, and Jem Marsh of course. The sales brochure for the Fastback included options for 5 speed gearbox (Hewland), dry sump, 997cc (84 to88 bhp) and 1148cc (102 to 104 bhp) full race engines, light alloy bellhousing, 72 litre fuel tank (for endurance racing), light weight alloy oil cooler, perspex windscreen (saving 15 lbs). 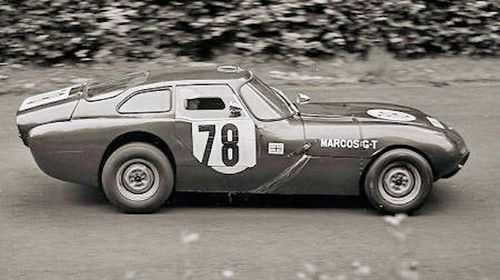 The successor Marcos coupé road cars were popular track/day cars, and several were raced in the BARC and BRSCC Modsports championships, including Jonathan Palmer taking the 1977 Modsport championship in a V6 (link). Mark Hales also successfully raced a 1967 wooden chassis V6 in the Modsports class. The 1800 Volvo engined cars are accepted for historic racing under FIA Appendix K, where they are very competitive, and there are still wooden chassis Ford-engined cars being raced. The fact that the wooden chassis can take the stresses of racing for so many years shows what a successful design it was.

The Mini Marcos is also a very successful car on the race track. It made its debut at a rain soaked Castle Combe race track on 25 September 1965. Driven by Geoff Mabbs, it lapped all but one car to win the BRSCC race by 81 seconds at an average of 76 mph.

In 1966 a French Mini Marcos (with Marcos support) was the only British car to complete the Le Mans 24 hour race. For the 1967 Le Mans, Marcos entered their own Mini-Marcos (drivers were Jem Marsh and Chris Lawrence). The car failed to finish due to an oil pump failure - however it was clocked at 141 mph on the Mulsanne Straight in the April test. The same car was more successful in the Kyalami 9 hour race in Nov 1967, when Jem Marsh and Brian Raubenheimer finished 15th, it appeared again in the 1968 race but did not finish.

Mini Marcos cars were raced widely, especially as a budget endurance race car, but also in local championships in many countries including Modsports in the UK. Mini-Marcos was also the chosen car for the "First Ladies International Race Team" (FLIRT), which competed at events such as the Nurburgring 1000 km race in May 1967, where they retired, the Grand Premo del Mugello in July 1967, coming 37th, and the Nurburgring 500 km race in September 1967 where two cars were fielded with Jackie Bond-Smith coming in 21st and 4th in class, and Joey Cook retiring.

The XP prototype was intended for the 1968 Le Mans. Raced at Spa as a shakedown test, it was one of many cars that retired with electrical problems in heavy rain. This proved to be its only race. Le Mans was postponed that year and the XP went to America. 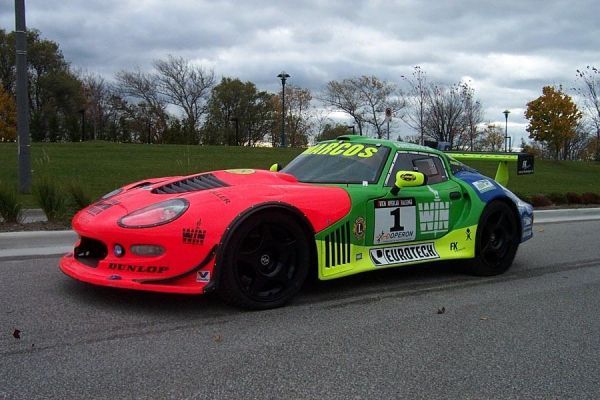 After the company's resurrection in 1981 the emphasis was on road cars, although price lists for the early V8 cars included a competition specification for "circuit racing, hill climbs and sprints". Competition options include FIA-approved roll-over bar, limited-slip differential, rose-jointed suspension and full harnesses.

In October 1993 Marcos unveiled its new competition car and announced a return to GT racing, including Le Mans. Based on the Mantara, the cars were designated LM400, LM500 and LM600. After some successes in the British GT championship in 1994, Marcos won it in 1995, 1996 and 2000. Two cars also competed at Le Mans in 1995. Both suffered electrical faults, one retiring and the other (driven by David Leslie, François Migault, and Jem Marsh's son Chris) finishing second to last, having completed 114 laps laps fewer the winning McLaren F1 GTR as its electrical problem stranded it on the Mulsanne straight for two hours soon after the start.

1998 saw the launch of the Dunlop-sponsored Mantis Challenge, a one-make race series for the coupé version of the Mantis road car with a dry-sump version of its 4.6 litre quad-cam Ford Modular V8 engine. Complete with FIA roll-cage the cars weighed 950 kg. Entries were few in 1998, and the cars were accepted for the Prvilege GT series as GT2, and the French GT series as GT3, winning one of the races in France. In 1999 the field was stronger, and the Dutch Mantis Challenge was also strong, and some races combined both. The 1999 UK series was won by Edward Horner, and the Dutch series by Robert Knook.

38 Mantis Challenge cars were built, but the series did not continue beyond 1999, after the GT Championship introduced the GT3 class. Many are still raced, including in the British Endurance Championship (Britcar), and at least one has been converted for road use.

In 2000, the Marcos racing business was sold to longtime GT sponsor Eurotech, a Dutch engineering firm. By that time, all Marcos racing cars and road car chassis were built in Holland, with road car assembly completed in Westbury by a much-reduced staff.

An LM600 driven by Cor Euser competed in the Dutch Supercar Challenge and won the GT Championship in 2002 and 2004, and again in 2009, the 50th anniversary of the founding of Marcos. 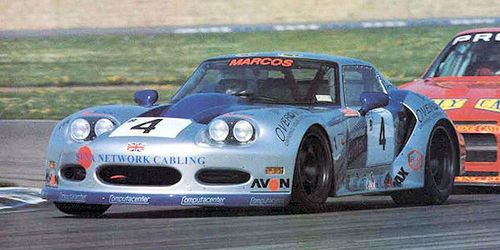