The 280 ZX (S130) was developed in four years . The result was a luxury touring car that looked very similar to its predecessor Z models and became a success. Responsible for the new line of the ZX was Peter Harris, the head of the American Development Center. His motto was: no outspoken sports car, but performance with luxury, as well as sporty look and handling. Investigations showed that the shape of the S130 was one of the strongest selling points. Thus, the requirement was to change nothing in this concept. Special emphasis was placed on aerodynamics during the development and the drag coefficient was reduced from 0.467 to 0.385 compared to its predecessor. All-round visibility was also improved by 24% (2 + 2 16%) more window space. The interior became bigger and more luxurious. The fact that the spare wheel (spare wheel) was no longer in a boot tub, but was behind the right side behind the side panel, the luggage space was increased by one-third. The new space- and weight-saving Bluebird rear axle with less protruding suspension strutomes also contributed to this .

The 280ZX became the best-selling generation of Z models (Z-Cars). When complete model change in the fall of 1978 came to the model Z the X added. Thus the sporty Z became more to the LuXuscoupe 280ZX. In this model also the two-piece Targa roof (also called T-top) was introduced and maintained in all other generations.

The car had a 2.8-liter straight-six and was introduced to the American market with 135 hp (SAE net, equivalent to about 137 DIN PS). In the US version, it was 14 hp less than the direct predecessor, the 280Z, which is due to the use of exhaust gas recirculation with otherwise the same engine. The model for California had a regulated three-way catalytic converter and 132 hp. Europe got a version with 140 DIN-PS at 5200 / min and a maximum torque of 203 Nm. The rest of the world got 170 SAE gross horsepower. The engine remained almost unchanged compared to the 280Z. Only the L-Jetronic has been refined, a lighter and more stable exhaust manifold with a richer sound installed and the Radiator fan made quieter.

In the nearly five-year construction period of the 280ZX extensive modifications were made, technical changes flowed directly into the current series. 1980 appeared in the US, the special model Tenth Anniversary ZX , a ZX in the GL equipment with leather seats, stereo and automatic climate control. The special edition was delivered in the colors wine red and gold with black hood and golden alloy wheels. The chrome parts were black anodized. The price was $ 13,850. The leather seats and the automatic climate control were also available as special equipment for the other models. In February, engine power in Europe was raised to 147 hp.

Further improvements were made in the spring of 1982. The engine output rose to 150 hp at 5200 rpm and the torque to 221 Nm at 4200 rpm. The compression ratio was increased to 9.4: 1, which required the ZX to use extra gasoline. Also the weight was slimmed down. So was changed from recirculating ball to rack and pinion power steering (-10 kg), new brakes on the rear axle and new alloy wheels mounted (-4 kg each). Externally, the new models were visible on the air intake in the hood and the multi-part, painted in body color bumpers. Inside, there were two-tone upholstery and panels, velor seats, red warning lights in the doors and a quartz clock with stop function.

In March 1981, the 280ZX Turbo was introduced as 280ZXT Turbo in the US. The turbo Although represented the absolute top of the S130 series, was outwardly but rather modest. The main distinguishing features of his weaker brother were the front and rear spoilers, a twin tube exhaust, black anodized window frames with wind deflectors on the A-pillar, a turbo lettering on the doors and low-section tires of dimension 215 / 60VR on 6JJ x 15 alloy wheels. The interior remained largely untouched. Here, only the voltmeter display was replaced with a boost gauge, and between the speedometer and tachometer, a computer control system was installed which interrogated the functions of engine cooling, windscreen washer, brake, tail and head lights.

The deepest interventions were experienced by the L28E engine. The changes a Garrett AiResearch TB03 turbocharger included reworked piston crowns and piston rings, an engine block with better cooling and knock sensor (F54), a more temperature resistant exhaust manifold, a double-tube rear muffler with 50% more throughput, larger valves and a 1.4x injection system. The TB03 turbocharger with wastegate was located on the left side of the engine and built a maximum charge pressure of 0.53 bar. All this, combined with Nissan's first microprocessor-controlled engine electronics (ECCS) , gave the 280 ZXT an additional 37 kW / 50 hp; this resulted in a total output of 147 kW / 200 DIN-PS.

The new performance was also adapted to the chassis and the differential. There are stabilizers fitted with a 23 mm cross-section and stiffer rubber damper. The differential gear got its own oil circuit with cooler, which was driven by a pump, which switched on independently at 130 °. The 1981 presented in the US Turbo was delivered exclusively with a three-speed automatic transmission . One year later came the T5 BorgWarner Five-speed gearbox on the market. In addition, the 205/60 R16 tires were converted to one-piece BBS rims on 215/60 R15 tires on two-piece alloy wheels. The headlights received a car wash, the doors electric windows and a turbo lettering. 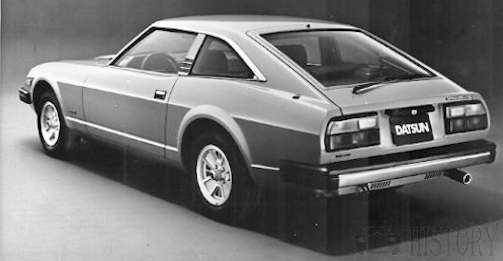