The Stephens Salient Six Series 70 was a motor car  was produced from 1917 to 1919 by the Manufacturer Stephens Automobile Branch of the Moline Plow Company until 1922 and from 1922 the Stephens Motor Car Company . Stephens' total output is estimated at less than 20,000  to 35,000 automobiles.  The Moline Plow Company was temporarily owned by John North Willys controlled companies.

With the detachment of the automobile division of Moline Plow and the formation of the Stephens Motor Car Company , the former department became independent. How the new company was funded is unclear. However, Moline Plow had announced that she wanted to focus on the core business of agricultural machinery. There seems to have been little change in the management  , which could point to a management buy out .With the series 70, the model name Salient Six was introduced, which lasted until the end of 1922 and the series 70, 80 and 90

In 1915, the Moline Plow Company, based in Moline, Illinois, began preparing its own car production to cope with a market slump in its core agricultural machinery business. The Stephens Six was a mid- size passenger car, designed by engineer Edward T. Birdsall . The production was prepared in Detroit , but set up in Freeport, Illinois , where it remained throughout the production of the Stephens -Automobile. The Salient Six was born here. Responsible for this was the Subsidiary Stephens Automobile Branch , by Matthew A. Steele was headed. Chief Engineer was John T. Trumble , who previously held similar positions at the Flint (Michigan) -owned automakers Monroe Motor Company and Chevrolet Motor Company. The latter was not yet part of General Motors at the time .

All Stephens were perceived as Assembled Cars , d. H. Auto, this was assembled from purchased components. This was a common practice, but it was often perceived as less well-behaved. In the case of the carefully constructed Stephens Six and his successors, that was probably not true, but it was a market disadvantage anyway.

Although many of the components were made specifically for Stephens, the public perception of the vehicle was Assembled vehicle , d. H. a car that has been assembled from purchased components. There were dozens of such brands, and hardly any of them lasted longer, and their products (including trucks or tractors) were often seen as of lesser quality - often wrongly, such as Argonne , Biddle , Cole , Daniels , Handley-Knight , Kenworthy , Meteor , Revere , Richelieu or Roamer prove.

The Stephens was reputedly constructed and solidly built. Technically, he was unremarkable; his six-cylinder engine with an initial 57 and later 59 bhp was a class standard.

For the predecessor model Stephens had a conventional, side-controlled six - cylinder Continental Type 7-W . with a displacement of 224.0 ci (3670 cc) and 55 bhp (41 kW) used. This was in the Salient Six by an overhead- the Root & Vandervoort Engineering Company (R & V) in East Moline replaced. Because this company already supplied most of the engines for the agricultural equipment of the parent company Moline Plow Company , it was also a natural choice for the Stephens. 1920 took over Moline Plow R & V .

A technical peculiarity of the R & V engine was that the air was led through channels in the cylinder head to the combustion chambers. Here it was preheated by the exhaust gases, which should lead to better combustion. The manufacturer said that so bad fuels were "cracked" and optimally burned. Cooling channels that hung on the water circuit should limit the temperature to prevent overheating.  In fact, the time often encountered, inferior fuels a continuing problem. Very large valves should accelerate the filling and emptying of the combustion chambers. The valves with double valve springs could be adjusted with the engine running on a screw.  The cylinder head was detachable. Stephens used both Tillotson -  as well as Stromberg - downdraft carburetor , fed by Stewart vacuum.

The 6-volt electrical system was powered by a 113-amp USL battery. Ignition, starter and lighting supplied AutoLite (until 1920),

The power was estimated at 35.25 hp. As a result of the measurement method, which only applies to the bore, all Stephens motors were at this power. This is also the basis of the 25.3 taxable horsepower in the UK .Of course, the vehicle had a cardan drive . The three-speed gearbox with reverse gear Stephens made to their own plans. As a special feature, a ball bearing output shaft was mentioned. The 10 "diameter dry disc clutch was purchased from Borg & Beck .

The chassis consists of a conventional  ladder frame with five trusses and one torsion tube at each end. At times there were rigid axles from and behind; the latter was supplied by Timken . The leaf springs were at least for later models from Mather . At the Series 90 , they measured the front 37½ inch (95.3 cm) and rear 52½ inches (133.4 cm) on each of 2 inches (5.1 cm) width.

The Salient Six received wood-spoke artillery wheels with 32 × 4½-inch tires and removable rim ; a supplier was Stanweld . The steering came from Gemmer  ,this had  drums on the rear axle. The handbrake acted on a drum at the transmission output.

A special feature of the Stephens -Automobile was its body. It was hand-crafted according to the principles of custom bodywork, following principles that have also been applied to top-of-the-range automobiles. The structure was made of stored hardwood and was planked with steel sheet.

The extensive basic equipment included a hall - central chassis lubrication , a Stewart - speedometer to 75 mph (), electric horn, air intakes in front of the windshield, a gear lock as anti- theft device and even a Kellogg air pump for the tires. Available was a Boyce - Motometer . The radiator grille was apparently available in nickel or painted version.

With the series 70, the model name Salient Six was introduced, the wheelbase grew to 118 inches (2997 mm). However, the biggest technical change was the engine, which according to the data of Stephens in the Root & Vandervoort Engineering Company (brand name R & V was made). He was up -steered and made with 57 bhp (42.5 kW) @ 2600 / min. insignificantly more than its predecessor. The engine received starter , lighting and ignition of Delco , a Stromberg - downdraft carburetor and Stewart-Vakuumbenzinförderanlage. The vehicle had a three-speed transmission and a Borg & Beck - clutch . The differential was spiral-toothed  and m was reduced to 4.75: 1. 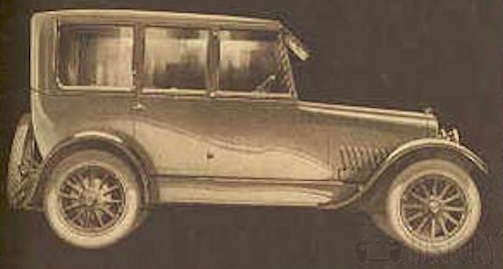