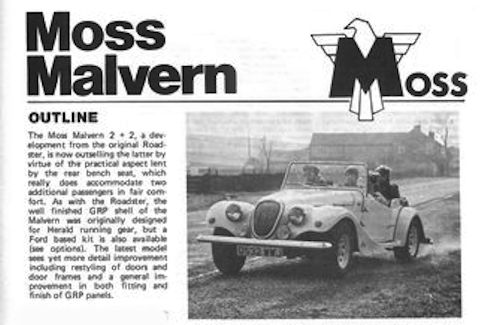 Moss was a British car brand,  that was used by six different car manufacturers to market  kit cars ..The brand name was Moss .

John Cowperthwaite founded in 1981 the company Moss Motor Company in Sheffield in the county of South Yorkshire . He started producing automobiles and kits .  In 1985, a fire destroyed the factory. Cowperthwaite then founded the new company Moss Sportscars in Handsworth near Sheffield and JC Autopatters in Sheffield the same year . CSA Character Cars from Radstock near Bath in Somerset 1987, Hampshire Classics from Basingstokein Hampshire in 1987 and most recently Moss Cars (Bath) from Bath also in 1987 continued production. In 2000, production ended However, Moss Cars (Bath) was dissolved already on 6 May 1997.In total, about 1310 copies were made.