The BRM P180 was the last Tony Southgate designed racing car for the British Formula One team and a complete failure. The car had a similarly low monocoque as the P160 , the nose of the car to be very flat due to the radiators moved to the rear of the car,  but with a cooling in the rear, along the transmission and Southgate focused so much on the weight savings, a man could easily lift the car on the front side alone that the driving behavior of the car suffered massively . Despite intensive testing and improvments to front and rear body sections , the car could never be made properly competitive the 2 versions built the most noted difference between them is the nose cone. 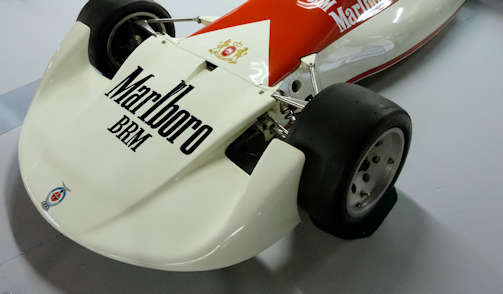 The team therefore relied on the P160E to compete in most of the Grand Prix races of the year. The P180 made its debut in the Spanish Grand Prix 1972 and came in five World Championship races used without scoring points. In the fall of 1972 he ran unsuccessfully in a national Formula 1 race without status in the UK and was finally withdrawn.