Automotive Manufacturer of Great Britain from 1965 to 1983. 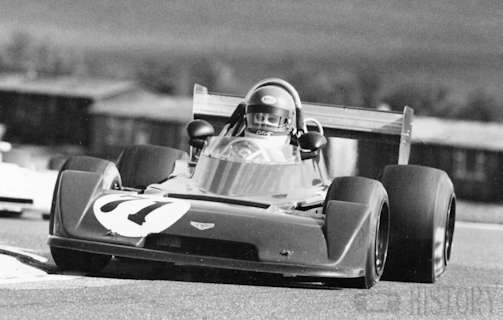 Chevron was a British manufacturer of sports cars and racing cars.

The brand of the British designer Derek Bennett was known in the 1950s for the sports and touring cars, which were built in a small workshop in Bolton in small series. Like Eric Broadley , the founder of Lola , and Colin Chapman , who built his vehicles under the name Lotus.

Bennett soon turned to racing car construction. He developed vehicles for the Formula Junior , two-seat sports cars and 1967 the first Formula 2 car , the Chevron B7 . Until the 1980s, the Chevron racing cars were an integral part of the Formula 2 European Championship. Also in Formula 5000 Chevron was involved. Peter Gethin won in 1973 in a Chevron B24 in the Race of Champions in Brands Hatch .

In 1978, Chevron prepared for entry into Formula 1 . Although the Chevron B41 was a usable race car, the team never drove a world championship race. The death of Bennett in an accident with a hang glider quickly brought the company into trouble. Bennett had been the driving force, his momentum was lost with him.

In the spring of 1980, Chevron had to file for bankruptcy and the company was liquidated. The German Formula 2 racing team Maurer Motorsport moved in early 1980 Chevron factory buildings to produce there in the next two and a half years, the company's own vehicles and to prepare the racing operation of the factory team. A Scottish consortium took over the remainder of the company and moved it to Winchester. After the construction of some racing cars for the Formula Ford , the operation was finally closed in 1983.