The Wartburg 353 is a passenger car of the VEB Automobilwerk Eisenach , which was manufactured from 1966 to 1988.

The 1966 introduced Wartburg 353 followed in its basic design with two-stroke engine , front-wheel drive , box-section frame its predecessors, but received that with the transition model Wartburg 312 , introduced more modern maintenance-free chassis with 13 "wheels, independent suspension and coil springs all round and certainly a new and back then the international-standard body with a trunk of about 500 liters,  which, as already that of the Wartburg 311 , Eisenach designer Hans had drawn Fleischer, supported by the form designers Clauss Dieteland Lutz Rudolph .

The basic design of the 353 based on the study of a full- tail car from Dietel in 1962, from which Fleischer derived the design of the 353 sedan. Dietel also contributed to the color scheme of the interior and the design of some interior components. Whether Clauss Dietel or Hans Fleischer had the more definitive share in the design of the 353, is controversial among experts and witnesses.  As a right-hand drive version, the vehicle was the UK under the name Wartburg Knight could no longer be imported until 1974 because of an outdated two-stroke engine with bad emissions. The transition model Wartburg 312 with the body of the Wartburg 311 and the frame of the later Wartburg 353 was introduced on September 1, 1965 from the chassis number 65,533. Starting from 1 June 1966 the vehicles received from chassis number 01.30 001 the new body, connected with a change of the type designation of "1000" in "353". A new transmission received since July 1, 1966 all vehicles from the chassis number 02.14 001.

The introduction of the body works Halle and Dresden crafted combination variant Wartburg Tourist took place in 1968. tailgate and rear fenders were made of glass fiber reinforced plastic made. First, the tourist was made with a closed C-pillar, 1970, a forced ventilation with air outlets in the C-pillar was introduced.Starting from VIN 04.10 474 took place on May 6, 1969, the introduction of the new engine type 353-1 with 36.8 kW. Since March 3, 1975 / from VIN 10.06 948, the vehicle was produced as Wartburg 353 W  with front disc brakes and many detail changes. The body remained unchanged.From chassis no. 17.20 932, the vehicles produced since 14 June 1982 had a Jikov 32 SEDR carburetor with intake manifold preheating (it is not recommended to retool older models), new rear brake drums and H4 headlamps .

From chassis no. 20.24 100, the radiator installed behind the engine of all its predecessors (including the DKW F9 ) was moved forwards on vehicles produced since June 30, 1985 . The body therefore received a new front middle section without separate "grill" with modified headlights.(Also built in West Germany successor of the DKW F9, which can be described under certain circumstances as sister models of the Wartburg, such as DKW F12 , F102 and Auto Union 1000 had always kept the radiator behind the engine.)

The production of the sedan ended with the introduction of the new model Wartburg 1.3 in the fall of 1988. The replacement of the combined version Tourist took place a few months later, so that in 1989 still 1191 vehicles were produced with two-stroke engine.

The frames were delivered without chassis number in the individual factories and completed vehicle-specific there.

For the production of the tourist in Halle and Dresden were parts (mechanics, frames and body parts, which resembled those of the sedan) delivered, the cars then assembled with the locally manufactured estate of bodywork. Subsequently, the vehicles (until 1990) were returned to Eisenach by rail and there subjected to the final inspection. 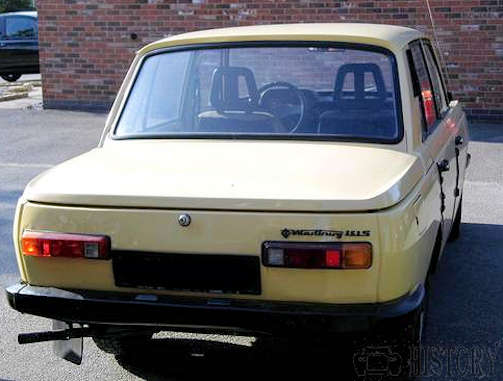