Automotive manufacturer, Eisenach Germany from 1898 to 1991. 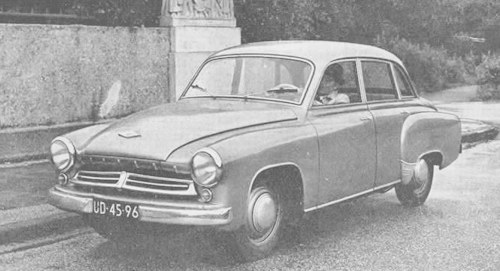 The Wartburg was a car marque manufactured in East Germany and revived in 1955 to 1991 by VEB Automobile, Eisenach; Germany.

The name "Wartburg" derives from Wartburg Castle on one of the hills overlooking the town of Eisenach where the cars were manufactured. From the 1950s.The marque dates back to 1898 when a car made by Automobilwerk Eisenach was named the Wartburg wagen. It consisted of a two-seating cane chair, four mudguards, two headlamps, and a two-cylinder, 765-cc engine. Its top speed was 25 mph (40 km/h). The name was dropped in 1904 when the company changed hands but re-appeared briefly in the early 1930s on the BMW 3/15 DA-3 Wartburg, which was BMW's first sports car.

The name was revived in 1956 by VEB Automobilwerk Eisenach and given to an updated version of their IFA F9 car which had been in production since 1950. The new car had a more powerful version of the three-cylinder two-stroke engine driving the front wheels and a completely new body. By this time, Germany had been divided into two countries (the West and the East) and the Wartburg factory was in the communist East (GDR).

Of the more than 1,600,000 vehicles produced. A significant proportion of the Wartburg production was exported. In 1975, the Wartburg production of 54,050 vehicles was distributed as follows: 34,250 for export, 8,941 for the own population, 7,300 for Genex , 556 for investors, 3,003 for state bodies. The largest customers included Hungary and Poland. The Wartburg 311 also sold well in the non-socialist economic area. Main markets were Belgium, Finland, Great Britain and the Netherlands, but also Denmark, Greece, Iceland and Spain achieved significant sales figures. Became known the export of up to 1215 pieces of the type 311 to the USA in the year 1960. In the UK, the Wartburg was sold as 353 Wartburg Knight.

During the 1970s, sales fell in the West. Only a few countries without their own car production, such as Belgium, Denmark, Finland, Greece and Spain, imported vehicles in small quantities in the early 1980s.

Exports to West Germany started in 1958, and by the early 1960s the car was exported to many other countries, including the United Kingdom and United States. Right hand drive models were first made in 1963 and exported to Cyprus, with British buyers being introduced to the car in 1964. However, just 550 examples (450 saloons and 100 estates) were sold in the UK. These were well equipped two-tone luxury models sold at the same price as a basic Austin Mini, appealing mostly to older people.

The 311 model was manufactured in a number of variations, including pickup, estate, and two-seater roadster. A convertible was advertised in the GDR in 1957 but its production never exceeded 350 units.

The engine was enlarged to 992 cc in 1962 and a completely new body was manufactured after 1966. This version, the 353, was sold as the Wartburg Knight in several countries, including the UK, where the estate model was sold as the Tourist. It remained on sale until 1976, by which time nearly 20,000 had been sold. This marked the end of right-hand drive Wartburg’s, but left-hand drive versions continued to be imported to the UK and at least one model was converted to right-hand drive.

Also, in 1966, the gearbox gained synchromesh on all speeds and was designed to freewheel as a fuel efficiency and engine protection measure, which meant that unless the freewheel feature was disabled by a lever beneath the steering column, the car did not benefit from engine braking. Because the engine was a two-stroke unit, it relied on the passage of the petrol mixture (two-stroke oil and petrol, at a ratio of 1:50) to lubricate the engine. With the freewheel device disengaged, the engine could be starved of lubricant and seize on long down-hill runs unless the throttle was opened briefly from time to time. Nevertheless, disengaging the freewheel device was recommended to give engine braking in snowy or icy conditions.

There are three models of Wartburg 353 - Limousine (sedan), Tourist (combi) and Trans (pickup). The 353W modification had a new, round-shaped dashboard and black-colored grille. It was also fitted with disc brakes on the front axle. The 353S modification featured new rectangular headlights integrated into the grille of a new shape. In the De Luxe version, you can see electronic ignition, 5-speed gearbox, front and back fog lights, alarm system and central lock door. Usually, this model can reach around 150-155 km/h. Moreover, the radiator was moved from behind the engine (353, 353W) to the classic position behind the grille.

The engine of the car was with 50, 55 or 57 HP (depending on the year of production and the carburetor type). Fuel economy was barely acceptable for run-about driving. The offer of Volkswagen to move a surplus engine assembly line to the GDR, to be paid off by manufacture, was accepted by the government on account of fuel economy. In 1988, the new model Wartburg 1.3 therefore replaced the old model 353S, featuring the reliable though bulky engine from the Volkswagen Golf. Being larger than the compact 2-stroke unit, this needed considerable reconstruction of the engine compartment. The new Wartburg's life was short, with the German reunification; production was inefficient and could not compete with West-German manufacturers. Production ended in April 1991, and the factory was acquired by Opel. 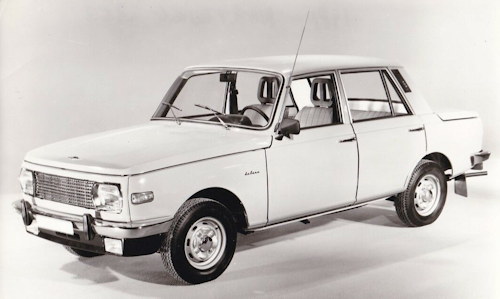