The Wanderer W24 is a cars of the brand Wanderer with 1.8-liter four-cylinder - inline engine and rear-wheel drive .

The Auto Union introduced this in 1937 as the successor of the model W35 . By 1940, 22,488 Wanderers W24 were built in the Auto Union plant Siegmar near Chemnitz, including 3571 four-door convertible coaches . The model is thus the most built Wanderer car.

The side valve engine has a power of 42 HP at 3500 rpm and is the shortened by two cylinder embodiment of the W23 -Sechszylinders. About a four-speed gearbox with gear lever in the center of the car, the rear wheels are driven. Chassis and body of the W24 were also used in the DKW "special class" with four - cylinder two - stroke V engine . At a wheelbase of 2.6 meters came the front double wishbone and the rear deriving from DKW rigid axle with raised transverse leaf spring.

The W24 was offered as a sedan and convertible sedan with 2 or 4 doors, as a 4-seater touring car or as a 2-door convertible (4 windows). Quantity for W24 Cabriolet: 1064

Due to the war, the production of Wanderer passenger cars was discontinued in 1941 and was not resumed due to the liquidation of the "old" Auto Union after the Second World War . 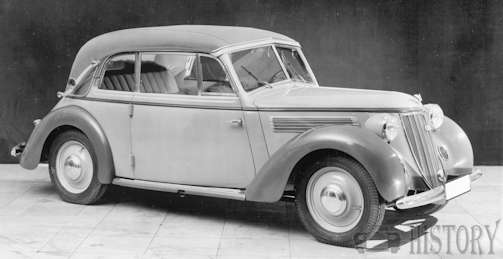