The built in the Auto Union plant Siegmar at Chemnitz W23 had a newly designed engine with a displacement of 2651 cc and a power of 62 hp at 3300 rpm, which was only side-controlled compared to the predecessors with OHV valve control , but seven horsepower more power offered. About a four-speed gearbox with shift lever in the center of the car, the rear wheels were driven. The chassis with the shortened by 10 cm to 2.9 meters wheelbase had rear instead of the elaborate swing axle a " swaying axis"(Rigid axle with raised transverse leaf spring). In addition, the vehicle electrical system voltage was lowered from 12 to 6 volts. These changes - which were actually setbacks - were needed for price reasons. A four-door sedan , a two-door convertible and a station wagon with outboard body struts (called "woody" in the USA) were offered. Gläser built the Cabriolet bodies in Dresden on the W23 chassis delivered from Siegmar .

In parallel, the Wanderer W26 was built with the same engine and a longer wheelbase of 3.15 m as a touring car and Pullman sedan , each with six seats. The rear "swing axle" ( pendulum axle ) of the W26 predecessor W50 was retained because the high-lying spring assembly of the floating axle took up too much space.

As a sister model of the W23 was also the Wanderer W52 with the same engine, 10 cm more wheelbase (3 m) and rear swing axle in the Auto Union program to make customers who placed emphasis on modern suspension technology, also an offer. However, there were only about 1,400 buyers, so this model disappeared at the end of 1937 again. The car was available as a four-door sedan (6 windows) and as a two-door convertible (4 windows).

Due to the war, the production of Wanderer passenger cars was discontinued in 1941 and was not resumed due to the liquidation of the "old" Auto Union after the Second World War . 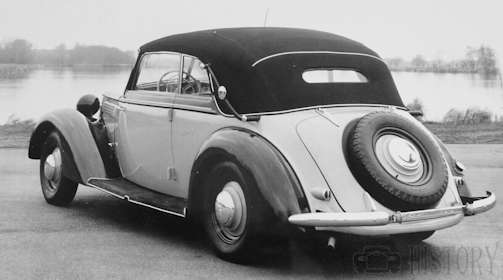