The Tesla Model X is a four-wheel-drive premium sedan with electric powertrain from Tesla, Inc. It was unveiled as a design prototype on February 9, 2012 in Los Angeles, and has been supplied to clients since September 29, 2015. The Model X SUV is what Tesla refers to it. In Fremont, California, Tesla produces the Model X. Two motors are used in the all-wheel-drive system, one for the front wheels and the other for the back wheels. 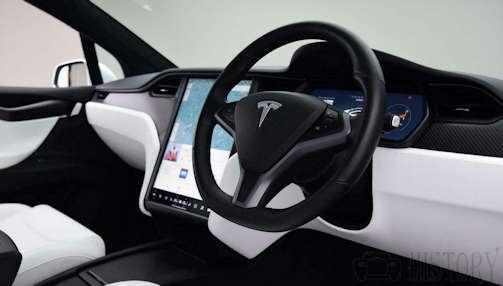 The Model X can accommodate up to seven people. The second and third rows of seats can be reached through double doors. These so-called falcon wings are bipartite. Above the window, they have a second joint parallel to the main joint, which requires less lateral space when opening. In the open state, the upper, the roof opening door parts are vertical and the lower, the car side opening parts horizontally. This allows upright standing next to the car under the open double doors, with their lower parts do not protrude into the air. The Model X has - just like the Model S - two storage spaces: the trunk in the rear. The rear trunk has a storage space of 745 liters in the concept vehicle. Folding the seats increases the trunk volume to over 1645 liters. The storage space under the bonnet offers a loading volume of 150 liters. As already known from the Model S, including the Model X has a 17 "touch screen.

The Model X is the first Tesla model that is available on request in a vegan version.A trailer hitch for up to 2250 kg towing capacity is included in the basic equipment. As a result, rear carrier for bicycles or skis can be attached, especially since no roof rack can be mounted due to the gullwing doors.According to the National Highway Traffic Safety Administration , it is the safest SUV ever tested by the agency.

Tesla vehicles from October 2014 have hardware for various driver assistance systems , which are referred to as "autopilot". When driving this includes a lane departure warning system ( Auto-Steer ) for highways, an adaptive cruise control (ACC), a lane change assistant and an emergency brake assist ( AEB ). There is also a parking assistant ( Auto-Summon ), which can work without people on board, where this is allowed.

Tesla offers the Model X in three variants with several battery capacities. In all variants, two electric motors each drive one of the two axles. Launched in August 2016, the P100D version , with its optional "Ludicrous" mode, accelerates from 0 to 100 km / h in 2.9 seconds, making it one of the world's fastest-moving production vehicles alongside the Tesla Model S.

Since mid-January 2019, orders for the model variant with 100 kWh battery capacity alone have been accepted; the production of the cheaper basic models with a smaller battery volume expires. Tesla guarantees for the Model X 8 years with unlimited mileage for the functioning of the battery  but not for capacity and performance, which diminish with time by use. For the durability of traction batteries see also life and cycle stability of traction batteries . 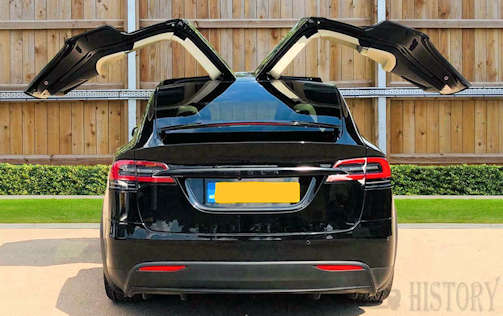