Automotive manufacturer Stettin; Germany From 1899 to 1940. 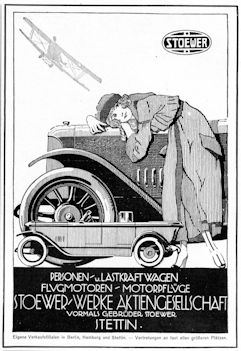 Stoewer was a German automobile manufacturer before World War II whose headquarters were in Stettin (Now Szczecin, Poland).

The first company was founded by the Stoewer brothers, in 1896 for manufacturing sewing machines in Stettin.

In 1908 Stoewers constructed Stoewer G4. This model was immensely successful - 1070 cars were built. In 1910, Stoewer cars were built under licence by Mathis of Strassburg. In 1916, the family-owned company was transformed into a limited company under the name of Stoewer-Werke AG, vormals Gebrüder Stoewer.

In the mid-20's a new class of cars was introduced: the D-Types included D3, D9 and D10 with four-cylinder engines, as well as D5, D6 and D12 with six cylinders. Something special was the 1921 D7 with a proprietary six-cylinder aero engine with 120 hp (89 kW). Of the fifty "D10" made, the only survivor is in Melbourne, Australia in original condition.

In 1928 the company started to build S8 and G14 models with eight-cylinder engines. At the beginning of the 1930s Stoewers delivered their highlights: G15 Gigant, M12 Marschall and P20 Repräsentant, each with eight-cylinder engines, with 60 to 120 hp (45 to 90 kW) and 130 km/h (81 mph) maximum speed. The production of these cars had to be cancelled after 2,500 vehicles being produced due to worldwide economic troubles. In 1931 Stoewer constructed one of the first cars with front-wheel drive at all, class V5 25 hp (19 kW), 80 km/h (50 mph) maximum speed. The model named Greif Junior was built under the licence of Tatra. Its afterdecessor V8 Greif was the last car being constructed by Mr Stoewer itself, class Arkona and Sedina were the last civilian cars produced by the company.

In 1936 Stoewer factory developed the light off-road car (le.E.Pkw, leichter geländegängiger Einheits-PKW) for the Wehrmacht, a versatile four-wheel drive car,initially equipped (to 1940) with four-wheel steering. Due to capacity-problems the cars had also been produced at BMW-Factory Eisenach as BMW 325 and by Hanomag in Hanover as Type 20 B. Together the three manufacturers made a total of ca. 13.000 units. Stoewer was one of several German companies that exploited slave labour during WW II and had its own camp for prisoners. After World War II, the Red Army seized the remaining production facilities, dismantled the factory and sent the equipment to the Soviet Union. The company subsequently ceased to exist.