The DeSoto Suburban also known as DeSoto Powermaster eight passenger sedan  was a large car that Chrysler produced under the car brand DeSoto in the model years from  1946 to 1954.

The DeSoto Suburban was the long version of the DeSoto 6-cylinder model series Deluxe , Custom and Powermaster .

The Suburban differed from the other through his long DeSoto chassis with 3543 mm (139.5 in) wheelbase , on which a 4-door sedan body was constructed with a three windows side could carry up to 8 passengers. This was accomplished by additional folding seats , a special feature were the rear seats, which folded forward folded an extended flat cargo space. 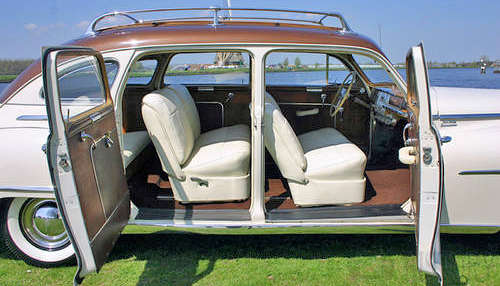 All Suburban had as the models Deluxe and Custom and the PowerMaster before 1953 Chrysler long-stroke series  six-cylinder - petrol engine with vertical valves ( "L-Head") and 3813 cc (237 cubic inches) displacement , the 109 bhp (81 kW) at 3600 / min developed. This was enough power to move the nearly 2-ton cars at cruising speed; the Suburban was able to glide along with this engine with sufficient speed, but was not suitable for lightning starts.

Most Suburban had a roof rack at the customer's request . Since there were no station wagons of the three model series, the Suburban was the car of choice for customers who needed large transport volumes, especially for the taxi industry . The Suburban was in his time often seen as a tractor for caravans , for which he was particularly suitable because of its long wheelbase and quite high weight.

The Suburban also formed the basis of DeSoto's luxurious Pullman model, a rare model that was made less in series than on special customer demand . However, at the end of the model year 1949, the Pullman was discontinued because it was cheaper to deliver the long-wheeled vehicles to specialist wheel- stockers and have them rebuilt there than to build the vehicles themselves.

Despite the popularity in the taxi industry - DeSoto was the second most popular manufacturer after the market leader Checker - Chrysler planned in 1955 the transformation and splitting of the model into its own brand ( Imperial ), which in the simultaneous conversion of DeSoto cars on V8  cylinder engines End of the DeSoto model with long chassis meant in late 1954.