The Buick Invicta 1st generation was a series of passenger cars , which was manufactured only in the model years 1959 to 1960 by Buick in the United States. The Invicta was the successor to the Century.

The Invicta was introduced in early 1959  fitted with a 364 or 401 cu in Nailhead V8 and 2 or 3 speed Twin Turbine automatic gearbox.Avaliable as a four-door hardtop sedan, five-door station wagon, two-door hardtop coupe and two-door convertible. In 1960, a four-door sedan (with B-pillars) was added. The sales never reached those of a LeSabre or Electra , but remained at the level of Buicks mid-century sports models Century (1954-1958) and later Wildcat (1963-1970).

From 1960 there was the Custom equipment package, which included individual seats and a center console in the hardtop coupe, in the convertible and in the station wagon. In the four-door variants, there was instead a leather bench with center armrest. The sales figures were considerable. 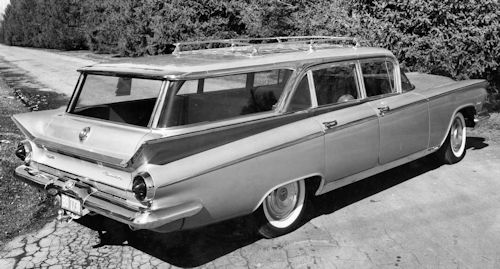