After building multiple trials and road racing cars, Colin Chapman introduced his first 'production' car, the Lotus Mark VI, in 1952. The heart of the Mark VI was a space frame chassis. Rather than a complete car, it was available to the general public as kit, wherein the customer could install any preferred engine and gearbox, making it eligible for a wider number of formulae.

The Mark VI in many ways reflected Chapman's background in engineering: his designs resulted from a stress analysis of loads into the frame, they were extremely light (the 6' space frame weighed only 55 lbs (25 kg)), and the suspension incorporated the latest advances. The prototype chassis was built up by the Progress Chassis Company and the aluminum body was constructed by panel beaters Williams and Prichard. (Both firms would later furnish bodies and chassis for subsequent models.) The cheap and easily available mechanical parts were sourced from the Ford Prefect. The Mark VI became a popular sight on Britain's racetracks, and was a frequent winner, beating many more powerful and expensive cars, earning praise for very good handling and superior low-speed acceleration.

An important facet of the success of the kit was Chapman's offering a comprehensive package in the Mark VI, including most of the special parts needed, and not just the chassis. The Mark VI chassis came with mounting points for several different engines including the 1172cc (71.5ci) Ford 10, the 1250 cc or 1500 cc MG TF, the 1500cc (92ci) Consul, and the exalted Coventry Climax. Standardized as far as possible for volume production, some units were customized per the owners wishes. Lotus even modified the owner's parts, if needed. The success of the Mark VI in competition and sales (100 built by 1955) established Chapman as a manufacturer of specialty cars. 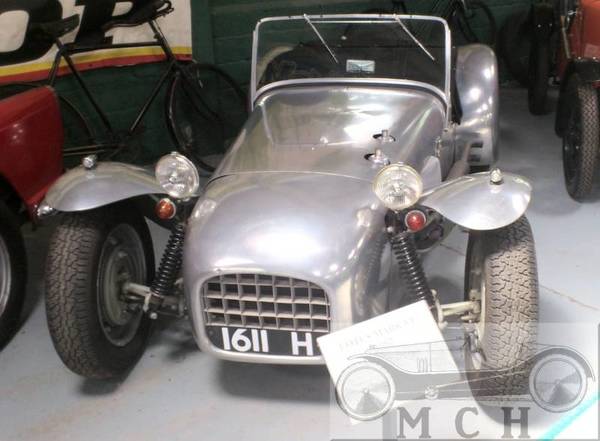