A series of improvements made to the Esprit during its initial run culminated in the S2 (or Series 2) Esprit, which was introduced in 1978. The most obvious of these changes are intake and cooling duct "ears" located behind the rear quarter window, tail lights from the Rover SD1, and an integrated front spoiler. S2 Esprits also used 14-inch (360 mm) Speedline alloy wheels designed specifically for Lotus. Other changes included relocating the battery from above the right side fuel tank (under the rear quarter window) to the rear of the car, adding an access door to the engine cover, as well as replacing the instrument cluster made by Veglia with individual gauges made by Smiths and using different style of switches on the dashboard.

During this era, special edition cars were made to commemorate Lotus's racing victories. Sharing the black and gold colour scheme of Lotus' then F1 sponsor, John Player & Sons, these cars are commonly known as the John Player Special (JPS) Esprits. Lotus' records of production figures are notoriously vague, however best estimates suggest that 149 JPS Esprits were produced.

The S2.2 was produced as a stop-gap model from May 1980, almost identical to the S2 but with an enlarged (2.2 L) type 912 engine used. This kept horsepower the same, but bumped up torque from 140 lb·ft (190 N·m) to 160 lb·ft (217 N·m). Importantly, the S2.2 also introduced the use of a galvanised chassis, although it did not benefit from the succeeding S3's chassis improvements. These cars are extremely rare even among Esprits: according to Lotus themselves, only 88 were produced in its thirteen-month production span. 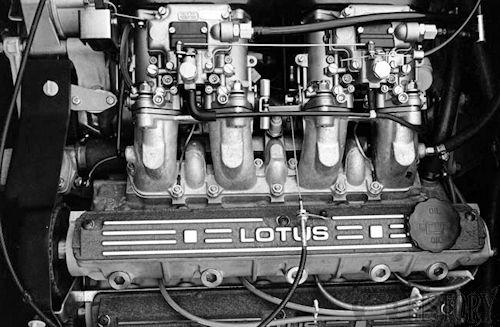 In 1980 the first factory turbocharged Esprit was launched. Initially, this was another special edition model commemorating F1 ties and reflecting current sponsorship, this time in the blue, red and chrome livery of Essex Petroleum, and is therefore known as the Essex Esprit. The new turbocharged dry-sump type 910 engine produced 210 hp (157 kW) and 200 lb·ft (270 N·m) of torque. 0-60 mph could be achieved in 6.1 seconds, with a top speed of 150 mph (240 km/h).

These performance improvements were coupled to a redesign and strengthening of the chassis and rear suspension, where an upper link was added to alleviate strain on the driveshafts, along with brake improvements. The Essex cars introduced a Giugiaro-designed aerodynamic body kit with a rear lip spoiler, prominent louvered rear hatch, more substantial bumpers, a deeper front airdam, and air ducts in the sills just ahead of the rear wheels, which were 15" Compomotive 3-piece items. Internally, scarlet leather, combined with a roof-mounted Panasonic stereo, made for a dramatic environment. 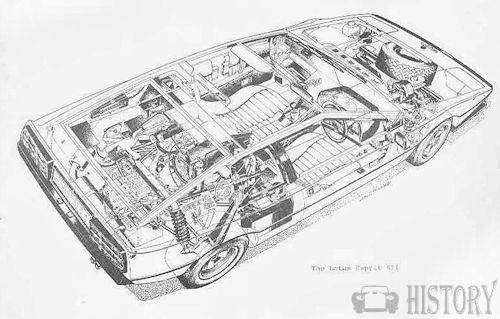 45 Essex Esprits were built, interspersed and followed by a number of non Essex-liveried but otherwise identical specification dry-sump turbo cars. Two Essex-spec Turbo Esprits - one in white and the other in copper - were featured in the James Bond film For Your Eyes Only (1981), although these were scripted as the same vehicle; the white one was blown up by an anti-burglar explosion system in Spain, while the red one was a "rebuild" of the original. 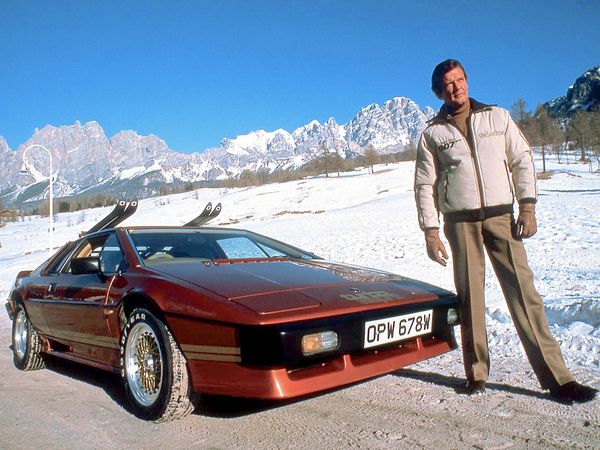 A white model driven by Bond in Spain, is destroyed when a thug trips its self-destruct system by breaking the driver's side window. The second one is a bronze model driven by Bond at a ski resort in Northern Italy. Contrary to popular belief, these two were not repainted Essex-spec Turbo Esprits but specially commissioned cars.