The Esprit was launched in October 1975 at the Paris Auto Show, and went into production in June 1976, replacing the Europa in the Lotus model lineup. These first cars eventually became known as S1 (or Series 1) Esprits. With a steel backbone chassis and a fiberglass body, the Esprit was powered by the Lotus 907 4-cylinder engine, as previously used in the Jensen Healey. This engine displaced 2.0 L, produced 160 bhp (119 kW; 162 PS) in European trim 140 bhp (104 kW; 142 PS) in US/Federal trim, and was mounted longitudinally behind the passengers, as in its predecessor. The transaxle gearbox was a 5-speed manual unit, previously used in the Citroën SM and Maserati Merak; it featured inboard rear brakes, as was racing practice at the time. The Series 1 embodied Lotus' performance through light weight mantra, weighing less than 1,000 kg (2,205 lb).

The S1 Esprit can be distinguished from later Esprits by a shovel-style front air dam, Fiat X1/9 tail lights, lack of body-side ducting, and Wolfrace alloy wheels. Inside the car, the most obvious indication of an S1 Esprit is a one-piece instrument cluster with green-faced Veglia gauges.

The car gained fame through its appearance in the James Bond film The Spy Who Loved Me (1977) where it was featured in a long chase sequence, converting into a submarine. The Perry Oceanographic-built submarine was sold at auction for £650,000 in September 2013 by RM Auctions at Battersea Park, London. 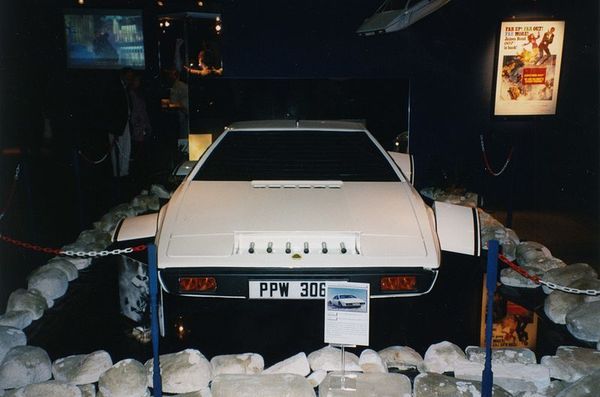 The Spy Who Loved Me Lotus under water
Lotus