In 1961, the Continental was completely redesigned by Elwood Engel. For the first time, the names Lincoln and Continental would be paired together outside the Mark Series; along with replacing the Continental Mark V, the 1961 Continental replaced the Lincoln Capri and Premiere, consolidating Lincoln into a single product line. Originally intended to be the 1961 Ford Thunderbird, the design was enlarged and slightly altered before being switched to the Lincoln line by Robert McNamara. One of the most striking features of the new Continental was its size. It was 14.8 in (380 mm) shorter than its predecessor. So much smaller was this car, that advertising executives at Ford photographed a woman parallel parking a sedan for a magazine spread. The new Continental's most recognized trademark, front-opening rear "suicide doors", was a purely practical decision. The new Continental rode on a wheelbase of 123 inches (3,100 mm), and the doors were hinged from the rear to ease ingress and egress. When the Lincoln engineers were examining the back seats that styling had made up, the engineers kept hitting the rear doors with their feet. Hinging the doors from the rear solved the problem. The doors were to become the best-known feature of 1960s Lincolns. To simplify production, all cars were to be four-door models, and only two body styles were offered, sedan and convertible. The 1961 model was the first car manufactured in the U.S. to be sold with a 24,000 mi (39,000 km) or 2-year bumper-to-bumper warranty. It was also the first postwar four-door convertible from a major U.S. manufacturer Walnut-paneling was on the doors.

Despite the smaller exterior dimensions, at 4,927 lb (2,235 kg), the new sedan was only 85 lb (39 kg) lighter than the lightest 1960 Lincoln four-door sedan (2 lb less than a two-door); at 5,215 lb (2,365 kg), the convertible outweighed its 1960 predecessor by 39 lb (18 kg).As a result (save for their respective nine-passenger models) the new Lincoln was still heavier than anything from Cadillac. or Imperial. This solid construction led to a rather enviable reputation as "Corporate management was determined to make it the finest mass-produced domestic automobile of its time and did so."

The 1961 Continental was Elwood Engel's Magnum Opus, as he was responsible for the complete design of the car. It was a sales success, with 25,160 sold during the first year of production.

This generation of Continental is favored by collectors and has appeared in many motion pictures, such as Goldfinger, The Matrix, Last Action Hero, Kalifornia, Spider-Man 2, Hit and run, Animal House, and the Inspector Gadget films. It has also appeared in the television series Pushing Daisies, in the opening sequence of the television series Entourage, and as the vehicle of choice for Michael Chiklis's character Vincent Savino in the series Vegas. Ford produced several concept cars which recalled this design. In 2007, Lincoln's Navigator and MKX SUV lines adopted chrome grilles in the style of these Continentals.

This so-called "slab-side" design ran from 1961 to 1969 with few changes from year to year. Lincoln dealers began to find that many people who bought 1961 and post-1961 models were keeping their cars longer. In 1962, a simpler front grille design with floating rectangles and a thin center bar was adopted. Sales climbed over 20% in 1962, to 31,061.

Due to customer requests, for 1963 the front seat was redesigned to improve rear-seat legroom; the rear deck lid was also raised to provide more trunk space. The floating rectangles in the previous year's grille became a simple matrix of squares. The car's electrical system was updated this model year when Ford replaced the generator with an alternator. For 1963, another 31,233 were sold.

The wheelbase was stretched 3 in (76 mm) in 1964 to improve the ride and add rear-seat legroom, while the roofline was squared off at the same time. The dash was also redesigned, doing away with the pod concept. Flat window glass was for additional interior space. The gas tank access door, which had been concealed at the rear of the car in the rear grille, was now placed on the driver's side rear quarter panel. The exterior "Continental" script was changed and the rear grille replaced by a simple horizontally elongated Continental star on the rear deck lid. 36,297 were sold that year.

The convex 1962–1964 grille was replaced by a flatter, squared-off one for 1965. The car was given front disc brakes to improve stopping distances. For the first time, parking lamps and front turn signals were integrated into the front quarter panels instead of the bumper. Taillights were fitted with a ribbed chrome grille on each side. With the facelift, sales improved about 10%, to 40,180 units. An oil pressure gauge was added. Front seat belts with retractors were now standard.

A two-door pillarless hardtop version was launched in 1966, the first two-door Lincoln since 1960, and the MEL engine was expanded from 430 cu in (7.0 L) to 462 cu in (7.6 L) cubic inches. The car was given all-new exterior sheet metal and a new interior. Parking lights and front turn signals went back into the front bumper, and taillights set in the rear bumper for the first time. The length was increased by 4.6 in (117 mm) to 220.9 in (5,611 mm), the width by 1.1 in (28 mm) to 79.7 in (2,024 mm), and the height (on the sedan) by 0.8 in (20 mm) to 55.0 in (1,397 mm) high. Curved side glass returned, however tumblehome was less severe than in earlier models. The convertible saw a few technical changes related to lowering and raising the top. Lincoln engineers separated the hydraulics for the top and rear deck lid (trunk) by adding a second pump and eliminating the hydraulic solenoids. A glass rear window replaced the plastic window used previously. To lure potential Cadillac buyers, 1966 Continental prices were reduced almost US$600 without reducing equipment levels.It succeeded, helping boost sales to 54,755 that year, an increase of 36%, all of it due to the new two-door; sales of both four-door models slipped slightly. Product breakdown for the year consisted of 65% sedans, 29% coupes, and just under 6% for the four-door convertible. 1966 was the first year a tape player was available and a new tilt steering wheel.

The 1967 Continental was almost identical to the 1966. The most obvious external difference is that the 1966 model has the Lincoln logo on each front fender, ahead of the front wheel; this does not appear on the 1967 model. It was also the end for the four-door convertible, down to just 2,276 units, a drop of 28% over 1966. In addition to being the last production four-door convertible; at 5,505 pounds (2,497 kg),the 1967 convertible holds the distinction of being the heaviest Lincoln since the Model K, and was even 55 pounds heavier than the Cadillac Fleetwood Series 75 Limousine of that year. Total production was 45,667. Warning lights on the dash included a cruise control on, trunk open, and an oil pressure light.

Safety came to the forefront in 1967–68 and resulted in energy-absorbing steering columns, "safety" padded interiors, and lap safety belts for all passengers. 1968 saw shoulder belts for outboard front passengers as well.

1968 brought some exterior changes. The parking lights, taillights, and front turn signals were once again in a wraparound design on the fenders to satisfy Federal standards for side marker lights, but looked very different from those of the 1965 model. The new 460 cu in (7.5 l) Ford 385 engine was to be available initially, but there were so many 462 cu in (7.57 l) Ford MEL engine engines still available, the 460 was phased in later that year. In April, the new Mark III made its debut, as a 1969 model. Total sales would be down to just 39,134.

1969 was the last production year with rear-opening "suicide doors", with few changes from 1968 (including the addition of federally mandated head restraints). Sales held steady at 38,383 for the Continental, plus another 30,858 for the new Continental Mark III.

In the CBS television situation comedy Green Acres (1965–1971), in which the cars were furnished by Ford Motor Company, lead character Oliver Wendell Douglas (Eddie Albert) is shown driving a 1965 Continental convertible and then in later episodes owns a 1967 model.

For the Kennedy White House, the Secret Service purchased a convertible parade limousine custom built by Hess & Eisenhart of Cincinnati, Ohio, from a 1961 Lincoln four-door convertible. Code named the SS-100-X, it was in this car that JFK was assassinated in 1963. By that time, the front of the car had been updated with the grille/headlight/bumper assembly from the 1962 model. After the assassination, the limousine was returned to Hess & Eisenhart, where it was repaired and retrofitted with full armor and a fixed roof. It subsequently continued in service for the White House for many years. This world-famous car is now on display at the Henry Ford Museum in Dearborn, Michigan.

in the film a pair (a sedan and a convertible) bring Bond to the airport on behalf of the U.S. Government.another 64 also when aMobster is  shot in the backseat by Oddjob and crushed in a junkyard 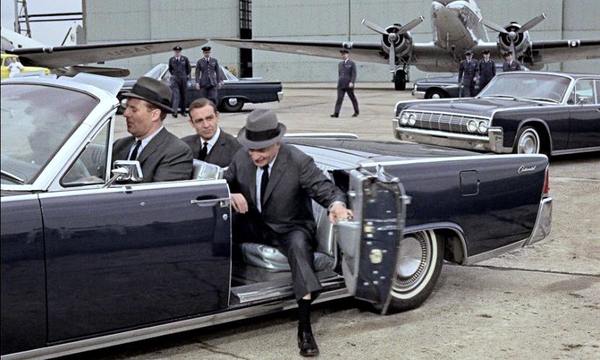