Ford wanted a superior and standalone up-market brand aside from Lincoln, to compete with General Motors' Cadillac and Chrysler Corporation's Imperial brands.

The new Continental was not intended to be the largest nor the most powerful automobile; rather, the most luxurious and elegant American car available, designed to recapture the spirit of the great classics of the prewar period—with prices to match. The Mark II's inspiration was the celebrated V12-powered Lincoln Continental of the 1940s, among the most notable cars of that War-interrupted decade.

Having considered using an outside design team, Ford turned inside to their own Special Products Division. In Fall 1952, they designated John Reinhart as chief stylist; Gordon Buehrig as the chief body engineer, assisted by Robert McGuffey Thomas; and Harley Copp as chief engineer.

Ford had wanted to use unibody technology, but Copp argued against such a choice for a high-brand/low volume model, which was required to be delivered into sale in a short time scale.

What emerged was something quite unlike other American cars of the period. While other makes experimented with flamboyant chrome-laden styling, the Continental Mark II was almost European in its simplicity of line and understated grace.

There was something of the style of the early Ford Thunderbird at the front, with a tasteful egg-crate grille; a long, curving hood; and straight fenders to the headlights. The fender line went back to behind the doors, at which point the line kicked up a little before curving back down to the taillights.

Little chrome was used compared to other vehicles of the time, and the only two-tone paint combinations offered were limited to roofs being contrasted with bodies. The car had power steering, power brakes, power windows, power seats, power vent windows, and a tachometer. The vanes on the wheel covers were individually bolted inside the frame of the cover. It sported a high greenhouse and a wraparound windscreen. Fueling was accomplished via a swingaway left taillight. The Continental Mark II had only one option, air conditioning, for $595. Cars with A/C had different body parts.

Most of the car was hand-built to an exacting standard, including the application of multiple coats of paint, hand sanding, double lacquering, and polishing to perfection.

For power, the Mark II featured the newly offered 368-cubic-inch (6.03 L) Lincoln V8. Standard equipment in the Lincoln line, the engines selected for the Mark II were effectively factory blueprinted, assembled from the closest-to-specifications parts available. Turning out 285 hp (213 kW) in 1956, the engine was tuned to produce 300 hp (224 kW) in 1957. The engine was mated to a three-speed Lincoln automatic, and both engine and transmission were subject to extensive pre-release testing. In a 1956 report from Popular Mechanics, the Mark ll got 16.7 mpg at 50 mph.

Its perimeter frame was of ladder form with a central spine between the transmission and the crossmember at the kick-up ahead of the rear wheels. The crossmember under the front seat was of box form, but all the other six, unusually, were made of tubing (with that at the transmission augmented by box members). A Mark II chassis was used to create the Lincoln Futura concept car.

The Mark II sold for around $10,000,the equivalent of a new Rolls-Royce or two Cadillacs (at least until the $13,074 Cadillac Eldorado Brougham out-priced it in 1957). In spite of this, Ford estimated they still lost over a thousand dollars per caron the 3,000 that were built.

About 1,300 were sold in the last quarter of 1955 after the car's October debut at the Paris Motor Show; another 1,300 or so in 1956; and 444 in 1957, some with factory-installed air conditioning. Initially, Ford accepted losses on the Mark II in return for the prestige with which it endowed its entire product line; but after going public, tolerance for such losses fell.

Famous owners included Elvis Presley, Frank Sinatra, Elizabeth Taylor, the Shah of Iran, and a cross section of the richest men in America. Taylor's car was a gift from Warner Bros. studio, and was painted a custom color to match her distinctive eye color.

While technically never a Lincoln and manufactured by a separate new division, Continental, the Mark II was sold and maintained through Lincoln dealerships, featured a Lincoln drivetrain, and sported a Continental-emulating spare tire hump in the trunk lid, affectionally called a "Continental kit" for all the optional add-ons during the 50's. The outside mounted spare was 1st used on the 39-48 Lincoln Continentals. On its hood and trunk were four-pointed stars, soon adopted by Lincoln as its own emblem.

Handbuilt and resultantly expensive at around USD10,000 on launch, the quickly redesigned 1958 Mark IIIwas cheaper at $6,000, mostly because it recycled Lincoln parts and technology. The result was that the two products were difficult to differentiate within the customer's mind, and resulted in the Continental marque's being reabsorbed by Lincoln. Confusion of the model as a Lincoln has reigned ever since.

Today, approximately half of the original 3,000 cars still exist in varying states of repair. An active owners' club exists, and thanks to the use of standard Lincoln mechanical components, most parts required to keep them going are available. Prices range between $8,000 for a running example in poor repair to $70,000 in concours condition.

From today's vantage point, it can be argued that the Continental Mark II was successful at being what it was intended to be: an American Rolls-Royce or Bentley, and a re-creation of the grand cars of the thirties. Unfortunately, it was not profitable to manufacture, even at its five-figure 1950s sales price. 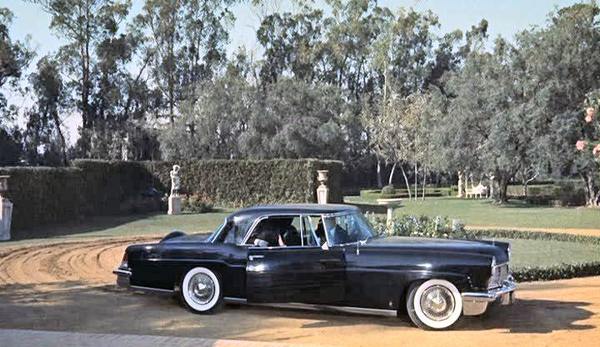