As development on the XV30 Camry began in 1997, development of the MCV30 commenced under Kosaku Yamada, with styling being done from 1998 to 1999. The larger, fourth-generation ES (designated MCV30) debuted in July 2001 for the 2002 model year, one year after the Lexus IS became Lexus' entry-level car. The presence of the IS in the Lexus lineup enabled the company to give the new ES 300 a more upscale image and luxury feel by excising the sporting pretensions of the previous ES models. The more aerodynamic shape had a drag coefficient of Cd=0.28. In Japan, the MCV30 Windom received a 2-star LEV rating.

Production occurred between July 2001 and September 2004 at the Tsutsumi plant in Toyota, Aichi supplemented until December 2002 with the Miyata plant at Miyawaka, Fukuoka. In January 2003, production started at the Higashi Fuji plant at Susono, Shizuoka, lasting until the XV30 ended production in February 2006.

The cabin was fitted with California Walnut wood trim on the front dashboard, center console, and doors as well as exterior puddle lamps, floor-well lighting, chrome door handles, an electric rear sunblind, and rear-view mirrors that would automatically tilt downward in reverse gear. Available options, including a power rear sunshade, rain-sensing windshield wipers, a DVD-based navigation system, and a Mark Levinson premium stereo system, were similar to features on the flagship LS 430 sedan.

ES sales sold 71,450 units its first year, making the Lexus ES the best-selling luxury car in the United States. Throughout its production run, the fourth-generation ES was Lexus' best-selling sedan, and outsold only in the Lexus model range by the RX luxury utility vehicle.

U.S. National Highway Traffic Safety Administration (NHTSA) crash test results in 2003 rated the ES 300 the maximum five stars in the Frontal Driver, Frontal Passenger, and Side Driver categories, and four stars in the Side Rear Passenger and Rollover categories. 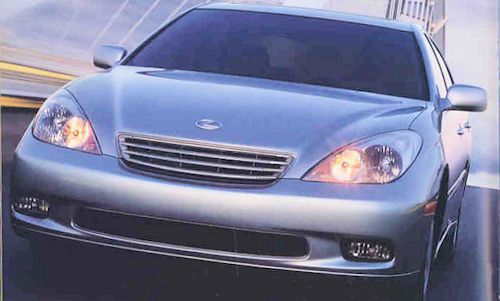