Development of the third-generation RX began in 2004. Chief engineer Takayuki Katsuda headed development, with design being conducted from 2005. In late 2006 design work by Masanari Sakae was chosen, with the final designs that were presented as 1:1 scale models being green-lighted for production in the first half of 2007. On October 9, 2007 design patents were filed at the Japanese Patent Office (April 7, 2008 in the U.S.) for both a conceptual variant and two production variants (RX and RX450h). The first North American pre-production prototypes were sent to Cambridge, Canada in early 2008 for testing prior to the first RX 350 rolling off the production line on November 28, 2008. A hybrid concept vehicle, the LF-Xh, previewed the third-generation RX's design direction at international auto shows a year prior to the production model's debut. The LF-Xh, which stands for Lexus Future-Crossover(X) hybrid, was first shown at the 2007 Tokyo Motor Show. The LF-Xh featured a V6 engine with electric motors, LED headlights and taillights, and a concept interior.

Lexus debuted the third-generation Lexus RX in November 2008. The AL10 series is built in Japan and Canada, with North American models primarily built in Cambridge, Ontario, Canada. American RX 350 sales began in February 2009 as a 2010 model. For 2009, the front-wheel drive RX 350 starts at US$36,800 while the all-wheel drive version starts at US$38,200. EPA-estimated fuel economy is improved at city/highway/combined 18/25/21 mpg for the FWD RX 350 and 18/24/20 mpg for the AWD model. The RX 350 (GGL10/GGL15) features a revised 3.5-liter 2GR-FE V6 engine producing 275 horsepower (205 kW) with a wider power curve, it remains ULEV-II certified and now uses a six-speed automatic transmission with sequential shift. 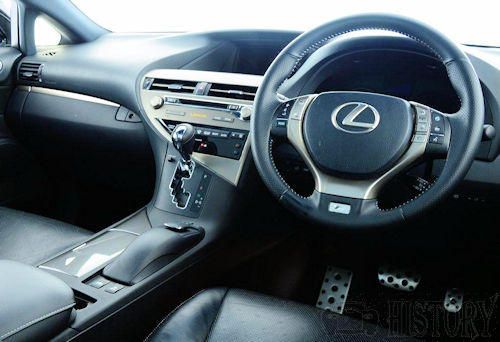 The third-generation RX comes standard with a twin-chamber front passenger airbags, side torso airbags for the front row, side curtain airbags for front and rear rows, and knee airbags for the front row. Active headrests become standard to help reduce whiplash injuries. Vehicle Stability Control (VSC) and Hill Assist Control (HAC) which helps prevent the vehicle from rolling backwards on inclines are standard while a more advanced Vehicle Dynamics Integrated Management (VDIM) system is optional. VDIM is designed to be more subtle and less intrusive in performance than VSC alone, VDIM can also engage prior to an actual skid taking place acting as a preventative measure. The Adaptive Front-lighting System (AFS) remains optional, while a new bi-xenon optional Intelligent Highbeam feature is added, this system can dim the high-beams automatically whenever traffic is detected. Other optional safety features include a Pre-Collision System (PCS) and a Head-up Display (HUD) which helps the driver keep attention on the road ahead by displaying navigation, speed, and audio information on the windshield; the HUD uses high-intensity LEDs displaying high contrast white figures on the windshield allowing it to be read in direct sunlight. The optional navigation system offers a backup camera and a Wide-View Side Monitor utilizes a camera on the passenger side view mirror to help eliminate blind spots on the passenger side at low speeds, this system does not include the 180° wide-angle front camera found in the LX 570. To further help improve visibility, water-repellent glass is used on the front doors.

Introduced in 2009 as a 2010 model year vehicle, the RX 450h (GLV10/GLV15) premiered alongside its non-hybrid counterpart, the RX 350. Manufacturer's specifications indicated largely identical outward dimensions for the RX 450h with the RX 350. The RX 450h was scheduled to go on sale in the U.S. in mid to late 2009, with sales introductions for the RX 450h in Asia (including Japan) and Europe in the same year. The RX 450h features an upgraded 3.5 L 2GR-FE V6 engine (shared with the RX 350) which produces 245 hp (183 kW) at 6000 rpm, along with a new inverter which boosts total horsepower to 297 hp (221 kW) (with the electric motors providing an added 22 hp (16 kW)). The new inverter is 8 kg lighter, and more efficient. Up to three electric motors are used in the hybrid system, including two dual motors for the forward wheels (123 kW output), and a third for the rear wheels on the AWD model (50 kW; engages when slippage is detected or the throttle pressed firmly). The RX 450h's V6 engine now runs on the Atkinson cycle for added efficiency.Compared to the prior Otto cycle system, the Atkinson cycle has a lower compression ratio, along with higher expansion ratio inside engine cylinders. This system uses less energy to form fuel-air mixtures, and releases more energy. A lighter, more free-flowing oil (0W-20) is also used, reducing friction energy loss and oil pump power requirements. Two additional systems are added to the RX 450h's Lexus Hybrid Drive powertrain, an exhaust heat recovery system to reduce engine warm-up periods (optimizing engine start-stop times, particularly in cold conditions), and a cooled exhaust gas-recirculation system to reduce fuel pumping loss. The electric motors use the first automotive application of liquid cooling on both sides of the high-current transistors, allowing greater contribution from the electric motors versus the gasoline engine.

Fuel efficiency for the RX 450h, according to EPA testing, is increased by twenty percent over the previous RX 400h. Initial manufacturer data pointed to an increase of at least eight percent over the prior model. In the U.S., the RX 450h is certified with a 2009 EPA fuel economy rating of 32 mpg city, 28 highway for the FWD model, and 30 mpg city, 28 highway for the AWD model. This 30 mpg combined rating compares with the 20 mpg combined rating of the non-hybrid RX model. The powertrain is linked to an instrument panel Eco light indicator, which enables drivers to monitor their fuel efficiency as it correlates with accelerator modulation.

In August 2010, Lexus began offering the RX 270 (AGL10), a front-wheel drive model with a 2.7-liter 1AR-FE inline-four engine, in Japan, China, and Russia. The RX 270 was a new entry-level offering for the RX lineup, produced with a lower base price and fewer emissions It was introduced at the 2010 Moscow Auto Show, and aimed to circumvent the additional taxes applied to automobiles with large engine displacements and higher emissions; import cars in China over 3.0 L are subject to additional fees.

In July 2010, Bloomberg reported that an all-electric Lexus RX had been developed in partnership with Tesla Motors. The RX was fitted with a Tesla-designed battery pack, and is to be used as a test mule for electric vehicle development.

A facelift was designed in late 2010 and patented on January 7, 2011 under design registration number 001845801-0004. The facelift was unveiled at the March 2012 Geneva Motor Show with new wheels, interior colors, new head and tail lamps and new grilles. New LED running lights were introduced as well. The F Sport was introduced, with a honeycomb grille, 8-speed automatic transmission, and a unique sporty interior. In the US, the new model uses the Lexus Enform telematics system, which includes the Safety Connect SOS system and Shazam tagging. Sales began worldwide in April 2012 for the RX 350 and RX 450h, with sales for the F-Sport variants starting in July of the same year.

Several awards won by the third-generation Lexus RX include AutoPacific Vehicle Satisfaction Award for Luxury Crossover SUV, Kelley Blue Book Best Resale Value Award for Luxury Utility Vehicle, and Residual Value Award for Near Luxury SUV from Automotive Lease Guide.The Insurance Institute for Highway Safety (IIHS) has awarded the RX 350 its Top Safety Pick accolade. In 2013, J.D. Power and Associates named the RX as the most dependable vehicle in the U.S.; it was the first time a SUV/crossover had ever been listed as such 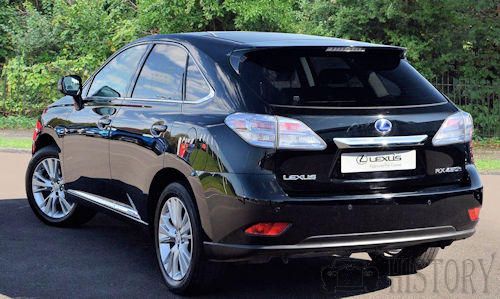