At the 1999 Tokyo Motor Show, Lexus displayed its Sport Coupe concept, a V8-powered convertible, signifying its plans for a replacement for the first-generation SC 300/400.The production version of its new sports coupe-convertible, the SC 430, debuted at the New York Auto Show in April 2000. The car was scheduled to go on sale in the second quarter of the following year. Power was provided by a 4.3 L 3UZ-FE V8 engine with variable valve timing (VVT-i) mated to a five-speed automatic transmission. This engine was the same model as that found in the UCF30 Lexus LS. The SC 430's V8 could produce 288 hp (214.76 kW) and 430 N·m (317 lb·ft) of torque, allowing the coupe to go from 0–60 mph in 6.2 seconds 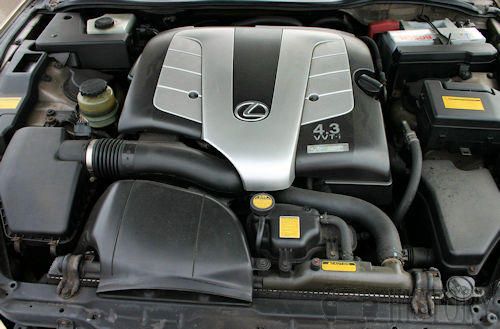 In contrast with the previous generation model, the redesigned Lexus SC was intended as a convertible from its inception. The development team was led by chief engineer Yasushi Nakagawa from 1996 to 2000. Lexus designers from Europe and Japan worked together to create a streamlined design. A design theme was chosen in 1997 from a sketch drawn by Sotiris Kovos, who in return was named chief designer. Led by Kovos, designers traveled to the Côte d'Azur to develop the vehicle's exterior shape, and studied the region's architecture, lifestyle, and harbors. The resulting convertible of 1998 received character lines similar to the region's yachts, in contrast with traditional waveform lines. The vehicle's side profile, the product of extensive wind tunnel testing, was intended to channel air around the passenger compartment at high speed during top-down driving.

The SC 430 chassis featured a double-wishbone setup for both the front and rear wheels. The vehicle platform shared elements with the GS 430 sport sedan, including variable-assist power rack-and-pinion steering.Safety systems ranged from traction control to vehicle stability control. The convertible received a ULEV emissions certification rating.

The SC 430 featured a retractable aluminium hardtop, all-leather interior with brushed-aluminum accents, navigation screen with folding wood panel, and 18-inch aluminium wheels. Chrome Lexus emblems were mounted on the back of the front seat headrests. The coupe has four seat belts and could technically seat four, but rear-seat space is limited. The hardtop fully retracts in 25 seconds. Standard luxury features include Burl Walnut or Bird's Eye Maple wood trim, a Mark Levinson premium sound system, DVD-based navigation system, and headlamp washers. For additional trunk space, as an option the SC 430 could be equipped with run-flat tires.

At its launch, the SC 430 was marketed as the "jewel of Lexus", and as the marque's first convertible, was intended as a more ostentatious addition to the Lexus lineup. Reviewers from Car and Driver magazine praised the SC 430 for 2002 as "an unqualified success", calling it "comfortable, fast, smooth, and quiet" with "all of the virtues expected in a patrician roadster."

In 2004, Lexus unveiled the Lexus SC "Pebble Beach Edition", a limited-production model of the SC. The special edition SC was produced in partnership with the Pebble Beach Company, and featured a unique exterior and interior color combination which changed with each model year. For model years 2004, 2005, and 2006, production of the Pebble Beach edition was limited to 400 units. Each Lexus SC Pebble Beach edition coupe exhibited special badging (featuring the "Lone Cypress" logo) on the front fenders, center console, and floor mats. For the 2006 model, a rear spoiler and spider alloy wheels was also included.

In 2004 and 2005, J.D. Power and Associates' Initial Quality Survey awarded the SC 430 as the highest ranked premium luxury vehicle.Kelley Blue Book gave the SC 430 its Best to Hold Value Award in 2002. In June 2004, a custom-designed Carolina Herrera SC 430 was shown at the Madrid Motor Show. The special edition SC 430 CH used a 'Testa di Moro' body color, with matching interior leather and carpeting, along with designer logos on the wheels and door sills. A line of accessories was also developed for the vehicle.

In 2012, Top Gear presenters Jeremy Clarkson and James May chose the Lexus SC 430 as the worst car ever built in their film The Worst Car in The History of The World. They criticized its handling, ride and style, with May calling the ride "absolutely diabolical", and stated that a big manufacturer should have known better.

In 2005 for the 2006 model year, the SC 430 was updated, with changes that included redesigned alloy wheels. In late 2005, the SC 430 premiered along with the Lexus marque in Japan; it was manufactured at the Kanji (Kanto Jidosha) assembly site in Japan. The SC 430 was sold in North America, Europe, Oceania, and Asia; unlike its predecessor, the SC 430 was officially imported to the British Isles; the old SC 400 had been a popular personal grey import.

In 2010, a final special edition model for Japan, the SC 430 Eternal Jewel edition, was produced, limited to 200 units. The 2010 model was the last automobile from any major manufacturer in the United States to ship with a cassette tape deck.

Production of the second-generation SC ended in July 2010 after nine years of production, but Lexus was still using them in the Super GT until the 2013 season ended.

According to Car and Driver, Lexus is working on a "clean sheet" replacement for the SC and convertible theme will be retained, with a soft top instead of the hard top setup currently being used.

In July 2008, Edmunds InsideLine had reported that Lexus had cancelled the next generation SC due to slowing sales. A company spokesman did not confirm or deny the rumors, but called the report in the possible replacement with the introduction of the Lexus LFA as "unfounded speculation." Lexus subsequently announced the production of the SC 430 model for 2009, and in 2010.

The LF-LC was produced as a design study for a driver-focused vehicle at the direction of the Lexus Center in Japan, and work began on the concept in May 2010. The exterior appearance of the LF-LC was inadvertently leaked by Road & Track magazine several weeks prior to its scheduled auto show debut, when a preview of its February 2012 issue with the LF-LC on its cover (under the headline "Stunning! New Lexus Super Coupe") was posted to YouTube.

The basic equipment standard across all versions of the Lexus SC from 2001 to 2010.

In 2006 the SC 430 was entered in the (Super GT) race series in the GT500 class (cars with approximately 500 horsepower). Extensively modified from the factory car, the engine used is a modified version of the SC 430's 3UZ-FE V8 that was also used in the Toyota Supra race car from previous years.

The new SC 430 based race cars were immediately competitive with former GT500 champion Juichi Wakisaka and no. 2 driver André Lotterer driving the Open Interface TOM's SC to victory at the opening round at Suzuka giving the SC 430 its first victory on its debut race. Juichi Wakisaka and Andre Lotterer also won the GT500 class championship during the same year. In 2007, Lexus SC fully replaces Supras in the Toyota side, a Zent Cerumo SC 430 driven by Yuji Tachikawa was victorious in the GT500 opening round race.

In 2009, the Lexus Team Petronas TOM's SC 430 driven by André Lotterer and Juichi Wakisaka was the championship winner in the GT500 series, also the SC 430 was victorious in early rounds at the Suzuka Circuit. In 2010, the SC 430 continued in Super GT competition, where the MJ Kraft SC 430 and other Lexus Team Kraft SC 430s won victories at the 2010 Autobacs Super GT at Fuji Speedway.

In 2012, two years after production had ended the 430 continued to be a force in Motorsports. Namely in Formula Drift with the Achilles Radial Lexus SC430 powered by a 2JZ and piloted by Daigo Saito.