In 1998, development began on the XU30 platform under chief engineer Yukihiro Okane. By 1999, design work was started and would continue into late 2000 when a general design was selected helmed by Hiroshi Suzuki. In early 2001, the final production design was green-lighted by the executive board, with the first prototypes being tested in 2002. Design patents were filed in October 2002 at the Japanese Patent Office and on April 21, 2003 at the United States Patent and Trademark Office.

In February 2003, the second-generation Toyota Harrier (codename ACU30 and MCU30 for the front-wheel drive models, and ACU35 and MCU35 for the all-wheel drive models) was launched in Japan. The Harrier was fitted either a 2.4 L or 3.0 L V6 with or without all-wheel drive, and a new 5-speed automatic transmission with +/- shift along with availabile "AIRS" air-suspension on the 3.0 L V6 models. The new RX launched for European and Asian markets in early 2003, where it was sold as the RX 300 (MCU30/MCU35) and made in Japan. Asian markets included Singapore, where it succeeded the previously sold Harrier, South Korea, and Taiwan. The RX 300 featured a 3.0 L V6, with only the all-wheel drive version available, and air-suspension could be specified.

In North America, the RX 330 series began sales in March 2003 for the 2004 model year. Here, the car was badged RX 330 denoting its larger 3.3-liter V6.The RX 330 (MCU33/MCU38) was powered by a 3.3-liter ULEV certified 3MZ-FE V6, rated at 230 horsepower (170 kW) SAE and 238 pound-feet (323 N·m) linked to a 5-speed automatic and was offered in either front or all-wheel drive. New technology features included Adaptive Front-lighting System (AFS) with swivel headlights, height-adjustable air suspension on the all-wheel drive models, Dynamic Laser Cruise Control system, and rain-sensing wipers. All North American models were initially built in Japan until September 2003 when production of the RX 330 began in Cambridge, Ontario, Canada.

Lexus debuted the RX 400h (MHU38) at the North American International Auto Show in 2004, with plans to launch the vehicle in the U.S. market. The equivalent Harrier Hybrid debuted in Japan on 22 March 2005, the same day as the Toyota Highlander Hybrid. Hybrid production began in March 2005 at the Miyata plant.The Lexus RX 400h made its U.S. sales debut in mid-2005, with over 9,000 pre-orders at launch. The RX 400h's arrival in the U.S. had been delayed by several months; Lexus had announced in November 2004 that the American launch of the hybrid Lexus SUV would occur for the 2006 model year. The RX 400h became the first production premium hybrid vehicle when it went on sale in 2005.

Compared to the Lexus RX 330 and RX 350, the RX 400h featured a different front grille and round foglights, and also differently styled LED taillights in place of the conventional LED ones on the RX 330/RX 350. Different exterior colors were offered. In 2007, Hybrid badging was added to the rear side doors. The RX 400h interior featured a hybrid information display on the navigation screen showing electrical motor, gasoline engine, and regenerative braking activation in real time.Some RX 400h models without navigation screens displayed the information on a small monochrome display on the instrument panel. When launched in 2005, the RX 400h came exclusively with brushed aluminum interior accents, in place of the wood trim offered in the standard RX. This changed in 2006, when the RX 400h became available with Bird's Eye Maple wood trim. 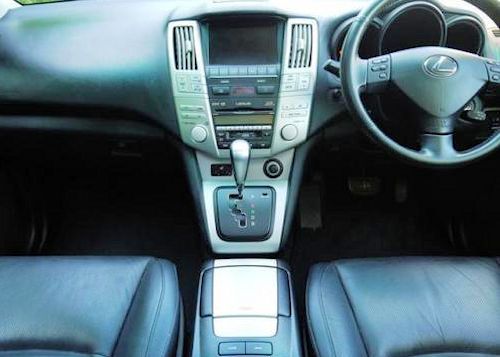 The gasoline-powered part of the RX 400h engine system was a 3.3 L 3MZ-FE V6, very similar to the one found in the RX 330. It produced 211 PS (155 kW; 208 hp) and 288 N·m (212 lbf·ft). The gasoline engine was aided by a maximum of two additional electric motors, one driving the front wheels, producing 167 PS (123 kW; 165 hp) and 333 N·m (246 lbf·ft) and connected to the CVT gearbox, and the other driving the rear wheels, producing 68 PS (50 kW; 67 hp) and 130 N·m (96 lbf·ft). The whole system, called Lexus Hybrid Drive (also Hybrid Synergy Drive), produced a maximum of 272 PS (200 kW; 268 hp). With Lexus Hybrid Drive, under normal driving conditions, only the front motor and gasoline engine were used. The rear motor was only used under full-throttle acceleration or when the front wheels lost traction. An Ni-MH battery was responsible for powering the motors, and charged by generators during deceleration or sharp cornering. Standard features included an Electronically Controlled Brake and Vehicle Dynamics Integrated Management stability control system.

The RX 400h gasoline engine switched off automatically and the car ran completely on electricity when either stationary, decelerating, or being driven at slow speeds — less than 60 km/h (40 mph).Not only did the hybrid drive in the RX 400h improve fuel economy, but with the assistance of the electric motor, the RX 400h could reach 0–100 km/h (0–60 mph) in 7.3 seconds, quicker than the gasoline-only RX. Despite the increased performance, the RX 400h/Harrier Hybrid consumed roughly the same amount of gasoline as a compact four-cylinder sedan and it qualified as a Super Ultra Low Emission Vehicle (SULEV) in the US. Passing power at lower and mid engine rpm's was noticeably improved due to the electric motor. The water pump for the gasoline engine is driven by the camshaft belt. To improve efficiency, and because the gasoline engine shuts down during electric-only operation, the alternator, power steering pump, and air conditioner compressor are beltless; rather than being tied to engine output,these components are powered by electric motors via the battery instead.

The RX 400h served as the launch vehicle of the Lexus hybrid lineup, which later expanded to include hybrid versions of other Lexus vehicles, including the GS 450h and LS 600h/ LS 600h L, and in 2009, the first ever designated-hybrid (no gasoline model available) Lexus, the HS 250h.

The basic equipment standard across all versions of the Lexus RX

In February 2008 for the 2009 model year, Lexus added a new Pebble Beach Edition, limited to 6,000 units, with a base MSRP of US$41,580 – US$42,980. These limited production models have "Pebble Beach" badges on front fenders and embroidered front floor mats, were available in Black Onyx and Truffle Mica color, and came equipped with limited-edition 18-inch alloy wheels, a color-keyed rear spoiler, and a chrome-finished grille. Buyers also received a choice of custom amenities designed to complement the Pebble Beach lifestyle. Production ended in December 2008.

The RX 330 was named most appealing luxury SUV by J.D. Power and Associates in 2004. It was also the Best Overall Value in the SUV market over US$30,000 in 2003, 2004, and 2005 according to Intellichoice. The Lexus RX 400h was one of only four SUVs to achieve recognition on J.D. Power and Associates' 2006 Automotive Environmental Index of the top 30 most environmentally friendly vehicles. J.D. Power also awarded the RX 400h the top spot for entry-luxury SUVs in its 2005 Automotive Performance, Execution and Layout Study on owners' attitudes towards new vehicle designs. At the 2005 GreenFleet Awards in the United Kingdom, recognizing environmentally friendly transportation, Lexus was recognized for introducing the RX 400h with the 4x4 Manufacturer of the Year title. The RX 400h was named SUV of Texas at the 2005 Texas Truck Rodeo awards, and was awarded recognition as a CNET editor's choice vehicle in 2005. 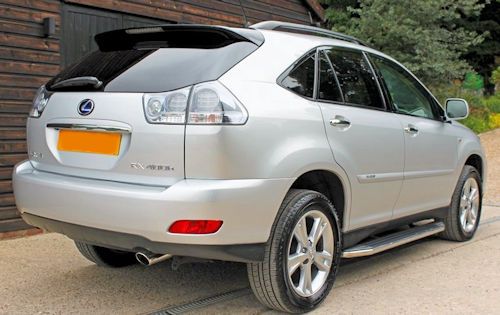