In the summer of 2007, development began on the L10 series GS under Yoshihiko Kanamori, with the design process finalizing under new president and CEO Akio Toyoda's direction in 2009. Design patents were filed in Japan on October 6, 2010 for the production model and a conceptual variant on March 29, 2011. In April 2011, Lexus showed the LF-Gh concept (Lexus Future Grand-Touring Hybrid) at that year's New York International Auto Show, previewing the stylistic direction of future Lexus models. The LF-Gh featured a large, spindle-shaped front grille, and press information further indicated that it had a new interior design which included an analog clock. The LF-Gh concept vehicle was taken by automotive journalists as an indication of what the fourth generation Lexus GS would look like.

The fourth generation GS had its world premiere at the Pebble Beach Concours d'Elegance in California in August 2011. The vehicle was shown to have a more subtle version of the LF-Gh's spindle grille, while overall exterior dimensions are almost identical to the previous generation. L-shaped LED front daytime running lamps and rear LED tube lamps are a new design feature. The new GS was the centerpiece of Toyota Chairman Akio Toyoda's initiative to restore passion to the Lexus brand and better compete with German luxury automakers that had been gaining market share in the United States. It was reported that Toyoda initially opposed the styling choices made for the new model, but since thanked the design team that persuaded him to greenlight the project.

The basic equipment across all versions of the Lexus GS Saloon.

The redesigned interior gains the Lexus Remote Touch mouse controller system in place of the previous touchscreen, linked to a split-view 12.3 in (310 mm) widescreen dashboard display. 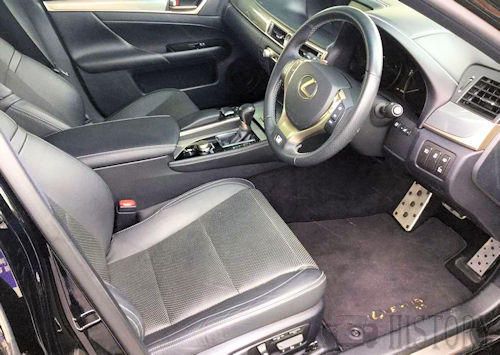 Save energy + airflow control (S-FLOW): The world’s first system that sends air only to where vehicle occupants are seated in order to maintain and improve comfort while also improving fuel efficiency

Gasoline variants such as the GS 350 and GS 250, as well as their F Sport variants, began sales in Japan in January 26, 2012, followed by the GS 450h and the GS 450h F Sport on March 19, 2012. Sales for the fourth generation in the US began in February 2012 for gasoline-only models including the GS 350 and GS 350 F Sport, with the hybrid version following several months after. A smaller-displacement model, the GS 250 (GRL11), was shown at the 2011 Auto Guangzhou, targeted for sales in China, Japan, Australia and the UK, but not the US.

The GS 450h (GWL10), rated at 252 kW (338 hp) and now using an Atkinson cycle design, has a 35 percent improvement in fuel economy over the previous generation GS 450h, and has a higher combined EPA fuel efficiency rating (31 mpg) than the 306 horsepower GS 350 (23 mpg). Trunk space is improved both for the hybrid and standard models. The GS 450h features standard full LED headlamps and a bamboo trimmed interior. The vehicle was unveiled in 2011 Frankfurt Motor Show.

The GS 300h hybrid model includes a 2.5l 4-cylinder Atkinson cycle petrol engine with a D-4S direct injection technology, derived from the third-generation Lexus IS. The vehicle was unveiled in 2013 Shanghai Motor Show. The vehicle went on sale in China, Europe, Asia, Australia, and New Zealand, but not in the US.

It is a version of Lexus GS 300h for European market, with 2.5-liter Atkinson cycle four-cylinder gasoline engine (181PS), two electric motors, a hard-drive navigation system with a 12.3-inch Monitor and Lexus Connected Services, a premium audio system, DVD player and rear-view camera with a monitor, among other features. The vehicle went on sale in 2014-01-11.

The Lexus GS was used in Motorola Cup North American Street Stock Championship touring car series competition in 1998, beginning with two GS 400 race vehicles driven by Team Lexus in its inaugural season. For 1999, Team Lexus achieved its first victory with the GS 400 in its sixth race at Road Atlanta. The GS 400 was raced until 2001, when Team Lexus switched to the IS 300. In the mid-2000s, the GS 400 was entered in the V8Star Series touring car racing season, with Ronny Melkus competing in the V8 GS in 2003.

In 2006, Sigma Advanced Racing Development and Lexus entered a GS 450h performance hybrid sedan in the 24 Hours of Tokachi race in Hokkaido, Japan, the first time that a hybrid vehicle was introduced. In 2007, Lexus Canada also entered the GS 450h in the Targa Newfoundland event. In 2009, the GS 450h was used as a safety car at the Muscle Car Masters event held at Eastern Creek Raceway, Eastern Creek, New South Wales, Australia.

In 2008, Manabu "Max" Orido used a second generation JZS161 Aristo in Formula D competition. Orido has several second generation models with different equipment used for drifting events, some with prototype suspension, and fitted with parts from the export Lexus GS 300. 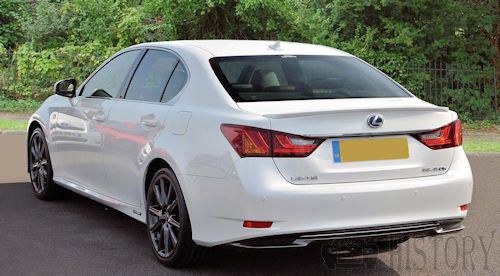