In the mid-1990s, work started on a Lexus variant of the Toyota Land Cruiser (J100), the LX (J100). The final design by Hiroya Kitazumi was approved in 1995, with updates by Kitazumi approved in 2001 and 2004. Testing was conducted from the mid-1990s till late 1997. In December 1997, the second generation LX 470 debuted at Los Angeles Auto Show, going on sale in the second quarter of 1998. It shared the floor plan and most body panels with the equivalent Land Cruiser, and differed in its front appearance and had a more luxurious interior. Exterior design differences included a quad-headlamp forward fascia with larger grille and different wheels. It was powered by a LEV-certified 4.7-liter V8 engine, which initially produced 172 kW (230 hp), later upgraded to 175 kW (235 hp), then 200 kW (268 hp). The final torque value was 445 N·m (328 lb·ft). It was rated to tow 2,900 kg (6,500 lb) with the tow package installed.

The front gained independent suspension, and the optional electronic locking front and rear differentials were dropped. Suspension included Adjustable Height Control (AHC) air suspension and Adaptive Variable Suspension (AVS). The AHC could raise the vehicle for off-roading and return to a normal driving height reducing the center of gravity and wind resistance. The lowest setting for when the vehicle was stopped allowed for easier entry, exit and loading. AVS alters shock absorber firmness in under 2.5 milliseconds at each wheel, individually selecting from a range of 64 settings depending on road conditions and driver input such as steering-wheel activity, braking and acceleration. The AVS system used a switch for the driver's preferences including "normal", "comfort" and "sport" modes.

A DVD-based navigation system, Nakamichi stereo with in-dash six-disc CD changer, electrochromic power folding side mirrors, and a smog sensor for the HVAC system were offered.For 2000 models, Vehicle Stability Control and brake assist were made standard.

Night View infrared camera safety system was offered as an option in 2002, the world's first active automotive night vision system, projecting information on the windshield using a head-up display; the driver could vary brightness using a dimmer knob. The 2003 LX 470 came with Variable Gear Ratio Steering (VGRS) system, varying steering ratios from 12.4 to 1 to 18.0 to 1 (previously fixed at 19.8 to 1), allowing the driver to apply less steering input to maneuver in tight places such as parking lots. By changing the ratio on the highway, minor adjustments made by the driver would not create excessive vehicular movement.

In 2003 for the 2004 model year, Bluetooth became optional and a backup camera came with the navigation system.

In 2005 for the 2006 model year, a refresher included LED tail lamps, adding VVT-i to the engine and increasing its power to 205 kilowatts (275 hp). During 2006, for the final model year, 2007, Lexus produced 400 "Limited Edition" LX 470s with Black Onyx paint, stone leather interior, and specialized badging and scuff plates.

Several awards were made for the J100 series: 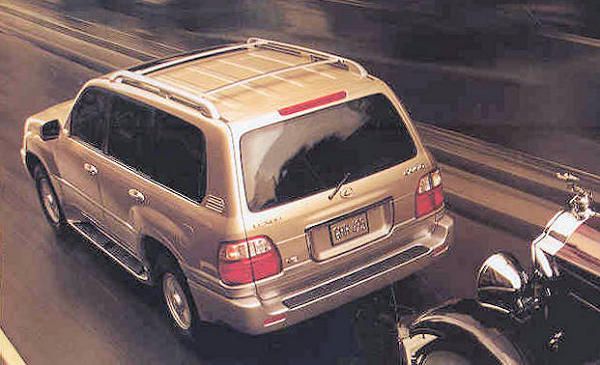